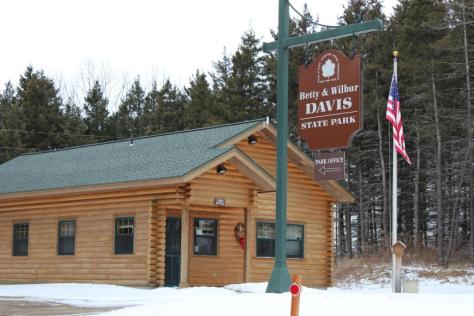 On February 24, 2009, two visitors to Betty and Wilbur Davis State Park were enjoying a sunny walk on Davis Road when two BIG birds flew overhead, going north.  “Golden Eagles!” exclaimed these experienced bird watchers.  Both were volunteers at the Delaware Otsego Audubon Society’s (DOAS) Franklin Mountain Hawk Watch which is known for its number of migrating Golden Eagles during the late fall.  The Golden Eagle is one of the largest raptors (birds of prey) in North America, not that common in eastern New York, but well worth keeping an eye out for.

During spring and fall migration, raptors use prominent ridges to save energy by riding updrafts that lift and/or push birds toward their destination.  On sunny days, warm air may spiral upward, creating thermals (columns of warm air) that lift birds to higher elevations.  Raptors soar and glide as much as possible, saving their own energy resources during the long journey.  In early spring, they are on their way to nesting territory.  For Golden Eagles coming through New York, that Destination is in Labrador, Quebec and Ontario, Canada.  Some Goldens stay the winter in our state, so in February it is hard to say if these were birds headed north or had been here all winter.

DOAS conducted Golden Eagle surveys at Davis Park in the spring of 2010, 2011, and 2012 with an average of 35 Goldens heading north each March.  Since then, area hawk watchers have counted raptors there when conditions seemed favorable, averaging 16 Goldens each March.  Data is collected by the Hawk Migration Association of North America and can be viewed at hawkcount.org.  (Look for DOAS-Davis State Park.)  It’s interesting to look at daily accounts to compare wind direction, wind speed, temperature and number of raptors identified, along with non-raptor sightings.

Site supervisor Joe Ritton has been an enthusiastic supporter of the counting efforts at Davis Park.  He built a wind break for the team near cabins 4 and 5 in early March.  It provides shelter from the ever-present wind, and prevents spotting scopes from blowing over.  The view to the south, west and north are wonderful with the park elevation being 1971 feet.  Here’s a 360 panoramic view from a point above the wind break:

Hawk watching requires patience, watching the sky until the exciting moment when a bird appears as a tiny dot in the distance and approaches, bringing many possibilities: Is it large or small? What type is it: a Buteo, Accipiter, Falcon, Harrier, Eagle, Osprey?  How many species are in a group of birds?  Is the bird an adult or is it immature?  The questions are many, and finding the answers is challenging.  Wind can keep birds far away, lighting can make colors seem to change, and birds show different shapes when seen at certain angles.  Practice is necessary to learn identification skills.  Spending time with an experienced counter at an established hawk watch is a wonderful way to learn.  Although Golden Eagles have been highlighted in this article, there will be many other species of raptors during migrations, too.  Look for Bald Eagles, Northern Goshawks, Cooper’s Hawks, Sharp-shinned Hawks, Broad-winged Hawks, Red-tailed Hawks, Northern Harriers, Rough-legged Hawks, and Ospreys. 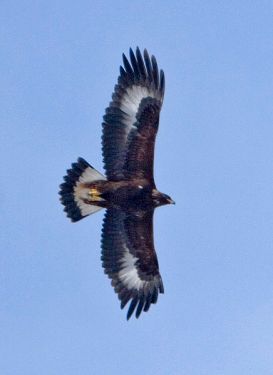 Bring a chair, good binoculars and a spotting scope if you have one.  A beautiful, calm day is most appealing to the potential hawk watcher, but without wind there will be few raptors.  Good visibility is important and raptors don’t migrate in the rain, so look for snow, fog or rain in the forecast when planning whether or not to come for raptors.

Those who are interested in spending more than one day looking for raptors at the Park may wish to rent a cabin.  Barred Owls have been heard during the night as well a late in the day.  Peace and quiet prevail.