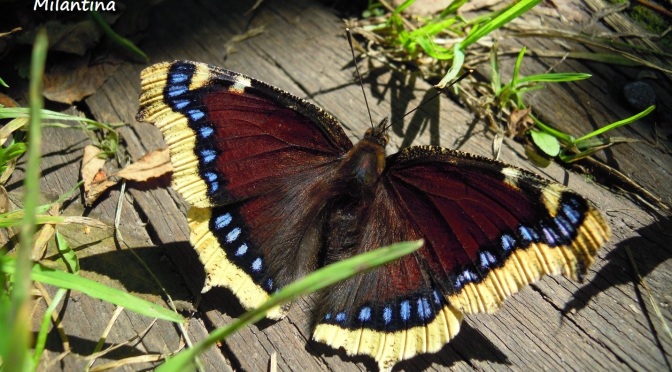 This spring, as you spend time hiking or recreating in one of your favorite state parks, keep an eye out for an insect with a name almost as evocative as its striking appearance – the mourning cloak!

Nymphalis antiopa, also known as the Camberwell beauty in Great Britain, is easily recognizable due to its wings, which feature an irregularly-shaped bright yellow border with a row of iridescent blue spots on the inner edge. Some other historical names for the species also reflect its appearance, including “grand surprise” and “white petticoat.”

The mourning cloak is unusual in that it overwinters as an adult, hiding in tree cavities and under loose bark. It starts flying again as soon as the days warm up, even where there’s still snow on the ground.

Not just native to the northeast, the mourning cloak is broadly distributed around the hemisphere – in fact, it’s the state insect of Montana! Their wingspan ranges from 2 ¼ to 4 inches and they have one of the longest lifespans for any butterfly at 10 to 12 months. Their favorite snacks include rotting fruit or tree sap, and they can often be found gathering on oak trees.

They’re also highly distinguishable in their immature form as the spiny elm caterpillars, with black spiny bodies run through with a streak of reddish to orange colored dots. After feeding on young leaves, the caterpillars will pupate and emerge in their adult form mid-summer. Some adults migrate in the fall, and have been spotted as far south as Guatemala.

Hankering for some hygge? Gather your favorite people and book one of our year-round cabins or cottages this winter-- available at Allegany, Golden Hill, Letchworth, Wellesley Island, Fair Haven, and Betty & Wilbur Davis State Parks. 📸: Betty and Wilbur Davis State Park. Link in bio. #nystateparks #cozycabin #embracecabinfever #thisisnystate #reboot #natureRX #cabinfever #getmoreoutdoors #weekendgetaway #hyggetime #bettywilburdavis
Yo Shorty. 🦉Meet the Short-eared owl, a raptor active by day with a distinct raspy bark. While in this photo, the owl’s short feather tufts (for which it is named) are tucked in close to its head, they are precisely that—just feathers. Their actual ears are small openings hidden below many layers of feathers just beside and slightly behind their eyes. Thanks to distinct round facial disks comprised of tiny stiff feathers, sound waves are directly funneled to their ear openings, allowing them to pinpoint little, nearly imperceptible sounds of small mammals or birds in the grass. Look for Short-eared owls cruising low over open fields, grasslands and marshes as they hunt. 📸: @wanderwomanpics #wildlifewednesday #nystateparks #owlsofinstagram #winterbirding #raptorsofinstagram #diurnalowl #getmoreoutdoors #meethelocals #shortearedowl #hearingismysuperpower
Olana State Historic Site, stunning in all seasons and right here in the Hudson Valley. Explore one of America's greatest masterpieces offering curated 360-degree views, five miles of historic carriage roads, and 250-acres of Frederic Church's landscape architecture. The grounds are open daily 8:30 AM to sunset. Tours are offered Friday through Sunday from 11 AM to 3 PM. Plan your visit: OLANA.org 📸: @andrew_gates_broker
Some loves last forever. 💚#valentinesday2020 #goplayoutside
Winter wow! Letchworth State Park all dressed in white. 📸: @sprungphotography #nystateparks #Letchworthstatepark #myfavoritestatepark #grandcanyonoftheeast #thisisNYstate #WinterNY #getmoreoutdoors #winterwonderland #snowscapesofinstagram #winterwhite #thisiswhyihikeinwinter
Blue skies and frozen falls, the perfect winter combination. 🙌🏼❄️🥾 Cascading 80 feet through a narrow gorge is the picturesque Mine Kill Falls for which this State Park is named. 📸: Meagan Fitzgerald. . . . . . #nystateparks #Minekillstatepark #blenheimNY #gotakeahike #myfavoritestateparkis #Winterhike #myweekendview #goplayoutsdie #WinterNY #thisisNYstate #waterfallsofinstagram #roadtripNY