Mayflies belong to the subclass Pterygota, which includes most winged insects and some insects whose predecessors had wings.  They have been around since for about 300 million years, the late Carboniferous period.

Mayfly larvae, on the other hand, will spend between 10 days and 2 years in water as larvae.  The length of time they spend as larvae also depends on the species.  They can be found in lakes and ponds, rivers, and streams; living on rocks, aquatic plants, and mud.  They eat algae and fine organic materials.

When it is time to emerge as adults, all the mayfly larvae of the same species emerge from the water together, at the same time.  Sometimes, the density of the adult mayflies is so great that they appear on Doppler radar and snow plows are needed to clear the roads. 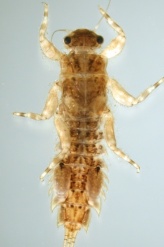 Cloeon dipterum By André Karwath aka Aka (Own work) [CC BY-SA 2.5 (http://creativecommons.org/licenses/by-sa/2.5)%5D, via Wikimedia Commons 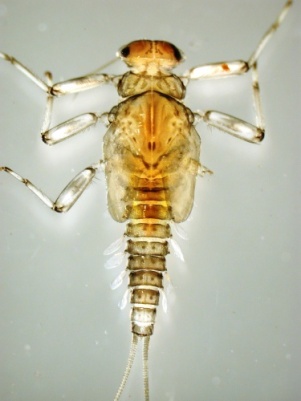 Because mayflies are sensitive to water pollution, they are excellent water quality indicators.  In the early 1970s mayflies were nearly gone from Lake Erie due to high pollution levels.  Fortunately the International Water Quality Agreement between the United States and Canada in 1972 made it possible for the mayfly’s return to the lake.

Mayflies can be found in many Parks.  Look for adult mayflies anytime between May through September, with the largest number of hatches occurring in late June through early July.  Who knows, you might find a new species of mayfly – a researchers from Southern Connecticut University and Lake Champlain Research Institute found a new mayfly species in Connetquot State Park Preserve in 2012.