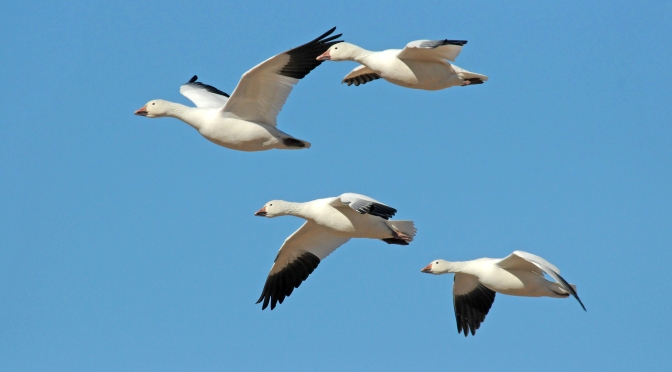 The most abundant species of waterfowl in the world, snow geese or snows (Chen caerulescens), breed in the high arctic and spend winters in the eastern U.S., primarily along the Mississippi river and Atlantic coastal states. In our area, during both their fall and spring migration, snow geese tend to linger in the Adirondacks for a month or more, often times in huge flocks of thousands of birds. You are apt to hear them before sighting them. They sound like a huge throng of baying hounds moving slowly but steadily into your range of hearing, and then you may spot them flying way overhead. If they are close enough, you immediately recognize their snow white bodies and jet black wingtips. You can see them on Lake Champlain, the St. Lawrence River, and the large lakes and marshes in the Finger Lakes region. Point au Roche State Park is a great place to see them up close in the fall as the birds linger on Lake Champlain.

Strong, graceful fliers, snows come down to land by performing a falling leaf maneuver—all of a sudden they seem to lose their balance and start tumbling out of the sky. To watch a large flock of them tumble out of the blue can be pretty amusing. They rank as one of the noisiest birds, barking continually as they fly and vocalizing even as they feed.

You might notice a dark goose or two. Snow geese occur in white or blue colormorphs or forms which ornithologists considered different species until DNA evidence in 1983 confirmed them as one.  They tend to mate with their respective colormorphs and they also segregate somewhat geographically, with most blues breeding and wintering in the middle of the continent and most whites in the east.

Snows feed almost exclusively on plants, preferably in wet areas such as marshes, lakes, impoundments, and waterlogged soil.  They eat everything from stems to leaves to rhizomes and tubers, and have a decided weakness for agricultural fields, which they work for waste grains and seeds.  Their primary method of feeding involves grubbing for rhizomes, tubers and roots by pulling the entire stem of the plant from the soil, with the result that a large flocks can entirely denude an area of vegetation.

Snow geese mate for life and develop strong family bonds, with young birds staying with their parents until their second or third year. Snow geese populations in North America have increased exponentially and in some regions by as much as nine percent a year, which most ornithologists and wildlife managers consider unsustainable.  Essentially victims of their own success, snow geese degrade the habitat in their nesting colonies by eliminating most plant matter and leaving only exposed peat or bare mineral soil, a situation that not only puts pressures on them but also on other species, such as semi-palmated sandpipers and red-necked phalaropes.  But for now, this boom in the population makes for good chances to see snow geese. So get out and enjoy these beautiful birds.  Enjoy the show.