When ten endangered Chittenango Ovate Amber snails (COAS), located in only one known location in the world: Chittenango Falls State Park, were brought into an SUNY College of Environmental Science and Forestry (ESF) lab for captive breeding and did not reproduce over the summer of 2014, graduate student Cody Gilbertson and advisor Rebecca Rundell knew they had to adjust something. Eventually the ten COAS were released, but as luck would have it, during the trial, a stowaway baby COAS came in on vegetation that was offered to COAS adults.  The tiny snail on the plant was placed in an enclosure to monitor closely. This was the beginning of a rapid learning curve for Gilbertson on the food preferences of COAS. New York State Department of Environmental Conservation (in charge of endangered species permitting) granted permission for them to keep the one snail over winter and raise it alone in the lab. From this blessing in disguise, Gilbertson was able to figure out the specific species of leaves this one snail she named “Hatch” preferred to eat – dead cherry leaves! Cherry leaves collected in the spring were consumed regularly and “Hatch” began to grow rapidly. Gilbertson knew it was risky keeping a small hatchling snail because in the past, 80% of hatchlings would die within the first two weeks of life in captivity. She thought it was unlikely “Hatch” would live, but this one snail persisted and survived in the lab showing her what it most preferred to eat, and she watched closely. It turns out this was a very practical way of finding out what COAS needs without harming individuals.

“Hatch” at 8mm (slightly longer that 1/4″), photo by Cody Gilbertson

“Hatch” active and growing approximately 12mm (about a 1/2″) in shell length. photo by Cody Gilbertson 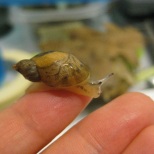 When Gilbertson brought two more COAS in from the wild during summer 2015, adults flourished on the improved diet and reproduction occurred resulting in over 600 baby COAS in just two months! The two snails mated with each other and about seven days after mating, egg masses were laid.  A total of about six egg masses were laid by each snail with about 33 eggs in each egg mass. About 270 of these snails were released back to their wild habitat to help expand the wild population of COAS. The other 300+ snails are still in our lab and are thriving. Over 130 snails have reached maturity (over 14mm in shell length) and over 30 egg masses from the captive born snails have been produced so far.

Snails in the lab are kept in a variety of plastic Tupperware within and incubator which protects them from drying out or getting too hot. photo by Cody Gilbertson 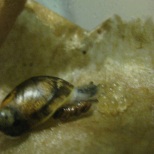 This COAS snail is laying an egg mass! photo by Cody Gilbertson 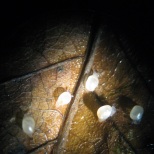 This research, supported by United States Fish and Wildlife Service, has pushed the recovery of COAS species forward with some very large steps:

3) Over 300 snails remain in captivity for assisting in securing this species existence.

However, there is still much to learn about this unique and rare species in our upstate NY backyard. Scientists will need to monitor and care for both the wild and captive populations over time for us to tell if this work is successful long term. But they have certainly put their best foot forward!