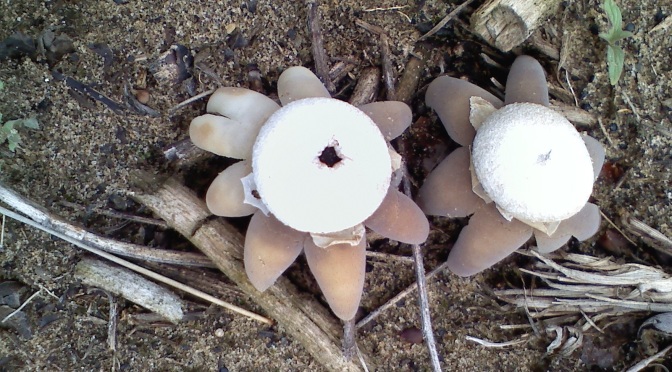 In late summer, if the humidity is high and we’ve had lots of rain, look for earth stars on the forest floor.  Found in hardwood forests with beech, maple, birch, and ash trees, earth stars are the fruiting bodies of underground mushrooms.

Earth star fruiting bodies make up only a small portion of a mushrooms mass.  The rest of the mushroom is growing underground as mycelium, thread-like part of the mushroom.  A mycelia (a single strand of mycelium) takes up nutrients from the place where they are growing. You may have seen mycelium growing under a log or in a pile of old leaves.

Since mycelium grow underground, it is hard to know the size of the fungus.  In 1998, forestry scientists discovered a single fungus from a honey mushroom in the Blue Mountains in Oregon that was found in nearly four square miles (1,665 football fields) of forest soil.

While the fungi in the northeast US are not as large as the northwest US, it is still fun to find mushrooms in the forest.  Keep an eye out for earth stars and other mushroom fruiting bodies during your walks and hikes in State Parks. Late summer through mid-October is a great time to see them.  If you do find some, share your photo.

Learn more about earth stars and other New York mushrooms: