February vacation is a great time to get out and explore our state parks. Many parks are offering free programming to keep you and your family occupied this February break.  Here is a sampler of just some of the many programs State Parks is offering this year. Our programs include active outdoor fun, wildlife ID, and parties!

Got a hankering to try ice fishing?  Then head out to Glimmerglass State Park in central NY on February 21, Moreau Lake State Park, north of Saratoga Springs, on February 22, or John Boyd Thacher State Park, Thompson Lake just west of Albany, on February 24 for a free fishing clinic led by Department of Environmental Conservation staff. All the fishing gear will be provided during these workshops. Remember that proper clothing is critical for safe ice fishing outings.  Dress warmly, paying extra attention to your head, feet and hands – dressing in layers is essential.

Perhaps you are hoping to get to know our natives.  Many parks are offering wildlife and plant identification walks, ranging from seal walks at Jones Beach State Park on Long Island to an owl prowl at Max V. Shaul State Park in the northern Catskills, as well as a winter tree identification workshop at Knox Farm State Park in western New York.

You may be able to see harbor seals resting at low tide during a seal walk, photo by Maritime Aquarium of Norwalk.

If you are looking for a little adventure, check out the snowshoeing and cross-country skiing trails at Parks across the state or join in on a guided hike. The Lake Erie ice volcanos are particularly exciting, and you can visit them at Evangola State Park in western New York. 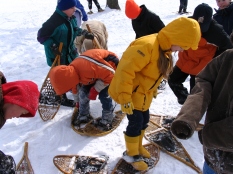 Posing inside an ice volcano at Evangola State Park, photo by State Parks.

Many state parks across the state will be offering programs for preschoolers during February vacation.