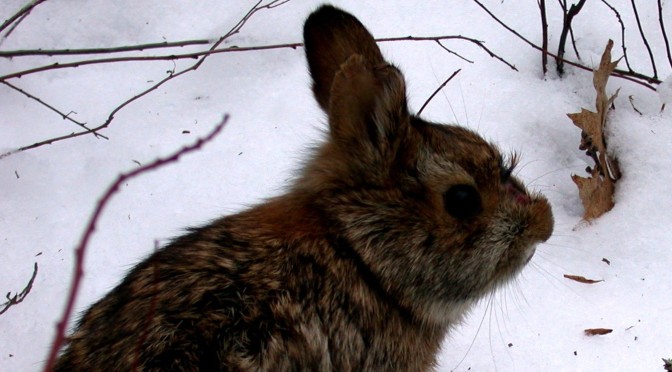 A bobcat at Fahnstock State Park

A coyote at Fahnstock State Park

A research study out of the State University of New York College of Environmental Science and Forestry (SUNY-ESF) is collaborating with Fahnstock State Park and Wonder Lake State Park in Putnam County to look at predator populations as part of an ongoing study of the declining population of New England cottontails (NEC), Sylvilagus transitionalis. NEC is a rabbit native to the northeastern U.S., but studies indicate that in the past decade, the population of NEC has decreased by as much as 50%. Some populations of the cottontails are in New York State Parks, and learning more about best management practices is critical to protecting this species.

As the New England cottontail (NEC) is a declining species being considered for listing on the federal Endangered Species Act, there are a lot of ongoing efforts to create habitat for these rabbits in the Northeast. The hope is these efforts will preemptively restore populations of NEC in the region, making it unnecessary to list the species as endangered.

Predation accounts for almost all natural mortality in NECs. As such, increases or decreases in the predator community would have serious consequences for the cottontail population. Most management projects have focused on enhancing habitat for NECs, but this study considers whether those projects might have the unintended consequence of altering the predator communities in such a way that cottontail survival is reduced. If that’s the case, then it will be necessary to consider predator management strategies when managing habitat for NEC. Results from this study will help inform habitat managers and recover NEC populations.

The project, led by PhD student Amanda Cheeseman and Dr. Jonathan Cohen, both from SUNY-ESF, together with Scott Silver of the Wildlife Conservation Society and Putnam Highlands Audubon, uses trail cameras targeting mammal predators, in combination with visual and auditory surveys for hawks, owls, and eagles, to examine predator communities in areas where different ways of controlling and managing NEC habitat are already being practiced. The project is taking place across multiple sites in Putnam and Dutchess counties. The pictures above were taken in Fahnstock State ParkThe information from the predator study will be compared to data from radio-collared cottontails in order to get a complete picture of the predator-prey relationships in New England Cottontail habitats.