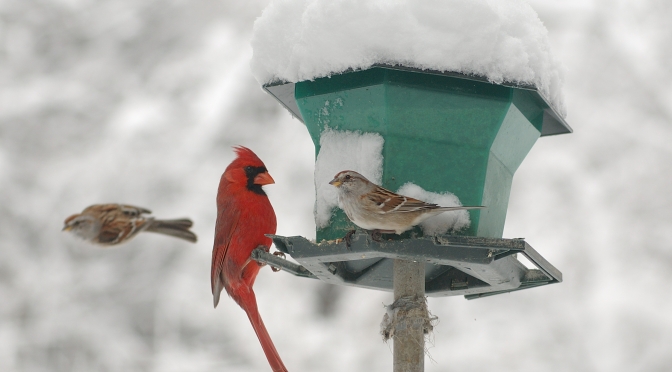 There are many species of birds that do not migrate to warmer or more temperate climates, but remain to take advantage of available local food sources.

For some of these smaller birds, specifically chickadees, spending the winters here in the frigid Northeast is possible due to a short-term hibernation state called torpor. During this period, energy expenditure is reduced due to exposure to extreme cold, food shortages, or severe droughts. Throughout this process of thermoregulation (maintenance or regulation of internal body temperature), metabolism, body temperature, and heart rate are decreased in order to help conserve energy and maintain body heat during the harsh winter months.

All of our fine feathered friends depend on specific habitats to obtain food and provide a safe place to nest and nurture their young. By protecting and conserving a wide range of habitats throughout our State Parks, we are ensuring the health and viability of New York State’s resident bird populations.

OPRHP has partnered with Audubon New York in efforts to enhance awareness regarding the conservation of state priority birds within designated New York State Parks. The “Audubon in the Parks” initiative concentrates its efforts on maintaining and conserving essential habitat in Bird Conservation Areas (BCAs) and Important Bird Areas (IBAs) for the over 300 bird species that reside on Park lands.

Currently, 67 out of the 136 IBA sites that have been identified in New York State are located inside our Parks, and 25 out of 59 statewide designated BCA’s also fall within park boundaries. These programs provide activities ranging from bird walks to data entry, and even larger habitat restoration projects.

Below are examples of some winter birds commonly found in New York State that you might see in our State Parks. Most commonly you will find these birds perched in a tree, gliding over a open field or even enjoying a snack at your backyard feeder.

The term passerine refers to perching song birds. The vocalists of the bird world, these birds have a repertoire of song, calls and voices; each used for specific  purposes. All members of this group have similar physical characteristics. The foot of a passerine has three toes facing  forward and one toe directed backwards, which allows them to hang on to tree branches, reeds or any vertical surface. These common bird species can often be heard and seen visiting backyard feeders.

Habitat: Commonly found in brushy areas next to the edges of woods.

Diet: Seeds from grasses and plants, few insects and berries.

Habitat: Common to open woodland and brushy areas, along the roadside and at backyard feeders.

Diet: Mainly seeds and insects. Usually seen foraging on the ground beneath feeders.

All species of Woodpeckers have stiff tail feathers which are used like props, allowing the birds to cling to tree bark while in search of food. Another common characteristic that is shared among woodpeckers is a strong chisel like bill which is used to tap and excavate insects from beneath the bark of trees. They are the percussionists in the world of birds. During a walk in a State Park, Woodpeckers can often be heard tapping on trees as they look for insects to eat.

Identifying characteristics: Both males and females have a white patch on their back and white spots on their wings. Only males have a red patch on the back of their heads, females do not have this added patch of color.

Identifying characteristics: Large in size with a long neck, black plumage on wings, chest and back, notable red crest, and white patch on underside of wings.

Owls belong to the Raptor family, also commonly known as birds of prey. Due to their carnivorous appetites which consists of small mammals (rabbits, moles, ground sqirrels, and mice), these skilled and efficient hunters have razor sharp talons, a hooked beak with sharp edges, acute eyesight, and distinctive facial disks which allow them to search for prey.

Habitat: Perches on ground or fence posts in open fields and marshes.  Snowy owls migrate to New York State from Canada and Alaska (also known as the Taiga region of North America).

Diet: Often hunts during the day for small rodents and birds in open fields. Have been known to feed on prey as large as geese.

Diet: Most active at night but has been known to hunt for small mammals and rodents during the day in fields and forests.

Even in the wintertime, these birds depend on specific habitats to obtain food and provide a safe place to nest and nurture their young. By protecting and conserving a wide range of habitats throughout State Parks, OPRHP is ensuring the health and viability of New York State’s resident bird populations.

For more information on the birds depicted here and additional species:

Click here for more information about Audubon in the Park.