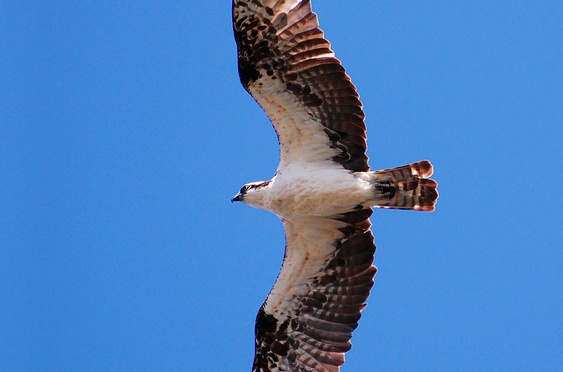 Signs of spring are beginning to show in the great northeast. The days are getting longer, skunk cabbage is beginning to erupt from the cold ground and birds that have been afar for the winter months are beginning to return to New York State. One may think “What birds? The birds have been here all winter.” True, not all of our native bird species in New York migrate south for the winter months. Birds such as chickadees, northern cardinals, and red tailed hawks tough out the winter, anticipating the spring breeding season (see prior blog post on overwintering birds).  But far more birds winter in South America, Central America, and the southern USA and make the long journey back to NY in the spring. It is an exhausting flight; the birds must make short stops to fuel up on available food and take a quick rest, then up to the sky to continue their journey. Upon arrival at their breeding/nesting grounds, whether in New York State or farther north, there is little time for rest or replenishment of their lost fat reserves from the long journey. The birds must stake out nesting territory, defend it, find a mate and start building the nest that they will care for, around the clock, in the weeks to come.

Keep your ears and eyes out for the early returning migrants, the birds that are first to arrive in the months of March and April. Before describing some of the species one may encounter while bird watching, lets discover the difference between bird calls and songs, primarily applying to passerines or “song birds”. A call is a brief simple sound like a chip note, peep, or chatter. A song is a longer sound segment, usually with distinctive melody such as a series of notes strung together. Calls can be heard all winter from our resident bird population, but in spring the songs begin. Songs are typically related to courtship and establishing territory. Bird sounds (song, hoot, chatter…etc.) are also very useful in assisting bird watchers with identification, as bird vocals are distinct to individual species.

Additional tips that help with bird identification are size, coloration or plumage, and habitat use. Pick a bird you are familiar with, say the American Crow, and think about the size of the bird you are trying to identify. Having an idea of what size the bird is can help you narrow down what the species is from one that may look similar but is larger or smaller than the bird you are trying to identify. Plumage (feather pattern) is very important when identifying birds and can also be very frustrating! However, the more you bird watch, the better you will get at noticing the differences between species.  Habitat type can also help narrow down what species a bird is. For example, if you are observing a bird in a wetland and you think you know what the bird is, but you’re bird guide says that bird is primarily found in dry open fields – you will have to continue looking. All of these factors combined; sound, size, plumage, and habitat use are useful tools in assisting the observer with identifying a bird.

These birds often travel in large flocks and can be found nesting in wet marshy or shrubby habitat. A medium sized bird; the male has a distinctive red patch on the upper wing. The female looks very different in color, being a light brownish hue with darker streaking. 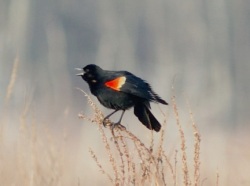 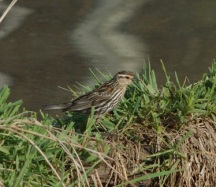 Listen to a red-winged blackbird sing –

The House Wren is smaller in size than the Red-winged Black Bird, weighing about 41 grams less. Both female and male House Wrens have similar plumage (meaning they look the same). Wrens in general are noted for the characteristic pose seen in the picture, with their tail feathers and head up in the air. The House Wren nests in dense brushy habitat, usually within woods. They will also take to bird boxes.

Listen to the song of a male house wren: 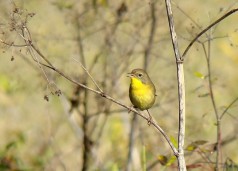 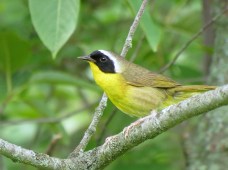 The Killdeer is an interesting bird, in that it has the unique behavior of displaying a broken-wing act to draw predators away from their nest. So if you see the act, consider yourself lucky, but do not approach! Killdeer are in the plover family, which primarily are a shore bird. However, the Killdeer can be found nesting on open ground in many habitat types, such as agricultural fields, parking lots, and sandy/bare ground areas. Their vocals sound similar to “Killdeer” and they have two distinctive black rings on their chest. Killdeer are larger than the song birds previously discussed, but smaller then a crow. 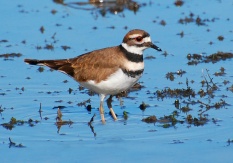 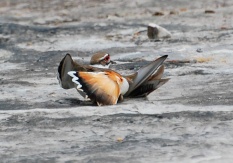 Listen to a killdeer call:

Great Blue Herons have long legs for wading in water and can be over three feet tall! These birds have a diet composed of fish, frogs, and invertebrates (organisms lacking a spine, such as bugs and insects). Therefore they rely on open water to forage and find food and can be found anywhere from marshy wetlands, rivers, lakes and flooded areas to the shores of the ocean. Look for Herons as the waterbodies began to thaw in spring. These birds nest in rookeries with dozens of nests built of large sticks in a single tree or group of trees, usually within a wetland.

Ospreys are a large raptor – meaning they are carnivores. Primarily eating fish, they hover high in the air over water and then dive, talons first, at their prey. They can be found along the shores of river, lakes, and the sea and build huge nests compiled of sticks. The nests can be built on the crotch of a tree, utility poles, or platforms specifically installed for osprey nesting. Typically these birds mate for life, meaning once a pair bond is formed; it lasts until one of the birds dies. Ospreys will return to the same nesting site year after year, adding more to their nest as they see fit. Look for these birds as the water bodies begin to thaw, and their characteristic hovering behavior.

Listen to an osprey call:

Now that you have learned about some of the early returning migrants, grab a good bird field guide, a pair of binoculars and a birding buddy and head to your local State or Town Park! Remember that these birds are under physical stress from their long migration, so avoid flushing or pushing them with your presence (don’t chase them). View with binoculars from a comfortable distance and maybe you will observe courtship behavior or the gathering of nesting material.