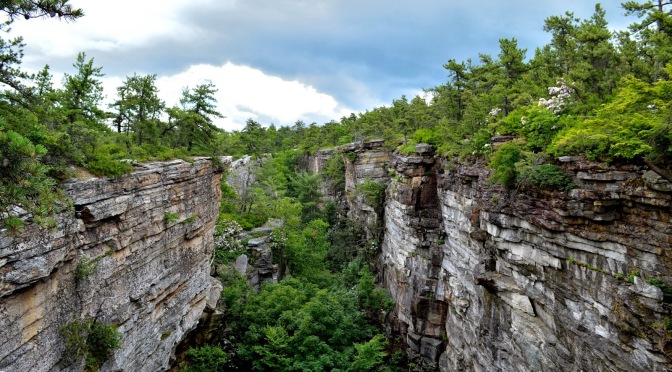 The most popular features of the Sam’s Point Area of Minnewaska State Park Preserve are the Ellenville Fault Ice Caves. This remarkable system of crevice caves fills up with ice and snow each winter, and retains some of its ice well into the summer. Even when the ice is completely gone, the caves remain cool all year round. This unusual phenomenon has drawn people to the caves for generations.

The significance of the caves has even been recognized by the National Park Service. In 1967, the NPS designated the Ellenville Fault Ice Caves as a National Natural Landmark. This designation is given to natural sites that exemplify the special or unique biological or geological features of a region.

Geologically, the Ice Caves are unlike other caves in the Northeast. Most cave systems are made of limestone, which is easily eroded and dissolved by water. This results in the large, open caverns that most people imagine when they think of caves. The Ellenville Ice Caves, on the other hand, are formed out of extremely hard and insoluble quartz conglomerate. When underlying rock layers were folded by tectonic movement, the hard conglomerate separated along existing joints in the rock.

The caves remain cold because of the natural refrigeration system that exists within them. When air moves across the top of the crevices, the colder, heavier air sinks down into them. The cold air then becomes trapped in the caves, keeping them at a comfortable temperature even during the hottest days of the summer.

While they received the National Natural Landmark designation because of their unique geologic importance, the Ice Caves have a great deal of ecological impact as well. The NY Natural Heritage Program recognizes the ice cave talus community as globally uncommon and rare in the state and a priority for protection. Because of their cold microclimate, the Ice Caves are home to several species that are infrequent in the region. These include goldthread (Coptis trifolium), mountain ash (Sorbus americana), and black spruce (Picea mariana), among others. Scientists have also taken interest in the presence of a species of cave-dwelling crustacean (Stygobromus allegheniensis) that is only found in four states: New York, Pennsylvania, Maryland, and West Virginia. This little arthropod lacks eyes, as it does not need them in complete darkness. It is also able to survive being frozen, a necessary attribute for surviving winter conditions in the caves.

The Ice Caves have local cultural significance as well. Many residents of the Shawangunks remember the days of “Ice Caves Mountain,” when the Sam’s Point area was managed very differently than it is today. From the late 1960s to the early 1990s, much of Sam’s Point was privately owned and operated as a tourist attraction. Visitors could drive their cars right up to Ice Caves, while a pre-recorded cassette tape described the various features encountered along the way. Doors were placed over the caves to keep the ice inside year-round, and the ice was lit up by multicolored flood lights. A rock wall was built on the cliffs of Sam’s Point to dissuade visitors from getting too close to the edge. While it may have been somewhat kitschy by today’s standards, it cannot be denied that “Ice Caves Mountain” was an important step in allowing the greater public to experience this previously obscure natural wonder.

Many things have changed since the Ice Caves Mountain days. While Sam’s Point is still managed for recreation, there has also been a large shift in focus towards conservation. Visitors may no longer drive through the park, and the cave doors have been removed in favor of letting the natural ice cycle of the caves take place. Interpretive displays within the park focus on the natural history of the caves, rather than just their physical spectacle.

While National Natural Landmark status highlights the importance of a site, it is up to the owners of that landmark to manage and protect it. Fortunately, Sam’s Point is part of a Park Preserve, meaning that all of the plant and animal life within it is protected. As such, those who appreciate the cultural, geological, and ecological significance of the Ellenville Fault Ice Caves are able to experience them to the fullest extent.

Espinasa, L., McCahill, A., Kavanagh, A., Espinasa J., Scott, A., Cahill, A. (2015).  A troglobitic amphipod in the Ice Caves of the Shawangunk Ridge: Behavior and resistance to freezing.

Featured image courtesy of Mike Adamovic, from Ice Caves of the Shawangunk Ridge