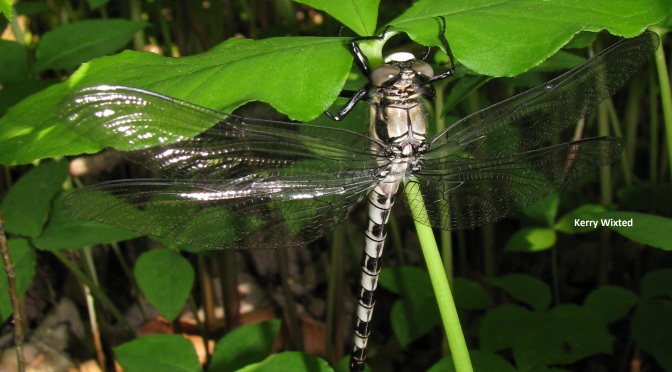 Each June and July, visitors to several gorge parks are rewarded with an unusual treat – the chance to see a “living fossil.”

The term “living fossil” refers to species that have evolved very little over the course of millions of years. Some well-known examples of living fossils include elephant sharks, ginkgo trees, and horseshoe crabs. Although all of these organisms have evolved, these species have stayed so similar that fossils from millions of years ago are still recognizable as ancestors to the modern species.

Meet the gray petaltail dragonfly (Tachopteryx thoreyi), a species of dragonfly that closely resembles its ancestors who were around when dinosaurs roamed the earth during the Jurassic Period – almost 200 million years ago!  During that time, the petaltail dragonfly was part of very widespread family known as the Petaluridae. Today, however, there are only 11 species of Petaluridae remaining worldwide.

The gray petaltail is found in several of the Finger Lakes gorge parks the gray petaltails love hunting in the gorges, because they can go to the sunny side of the gorge to get warm, which allows them to move much faster.  Petaltails are drawn to the gorges to lay their eggs in the soggy seeps on wooded slopes. Most dragonflies lay their eggs in water bodies. The eggs grow into juvenile dragonflies, called nymphs that also typically live in water.  That is not the case for the gray petaltail nymphs! The gray petaltail is the only species of dragonfly that does not have fully aquatic nymphs. Instead, the petaltail nymphs live and grow while hidden in the mud, moss and moist leaf litter in the forest seeps. As the nymphs mature, they climb up the trunks of trees to become the adult dragonflies that can fly fast and free all around the gorge.

While they are not nearly as large as their Jurassic ancestors, today’s petaltails are one of the larger species of dragonflies, with a wingspan of up to 5 inches wide.  Their distinct black and gray coloring also makes it easy to identify.  This species often perches upon rocks and tree trunks, but it is not uncommon for it to perch upon a passerby! Although they are large and ferocious insect predators (eating thousands of mosquitoes), dragonflies are harmless to humans. If you are lucky enough to be chosen as a dragonfly perch, you may be startled, but either brush them away very gently or just enjoy it!

The gray petaltail is listed as a species of special concern within New York State, as it is only known in specialized habitat in a small number of locations.  NY Natural Heritage Program (NYNHP) continues to survey for them and recently found another new site for them. Luckily, some of those locations are within New York’s state parks, providing habitat protection to this fascinating species – and maybe a chance to see this primitive insect for yourself, especially in June and July.