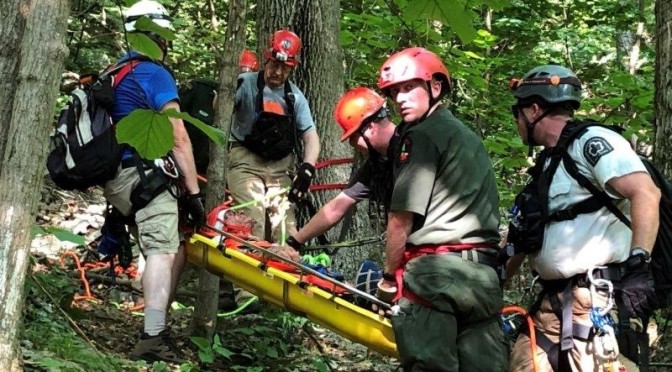 It was going to take heavy ropes and safety gear to rescue a 75-year-old man who was hurt and bleeding after falling near the rocky summit of Dutchess County’s highest point — 2,316-foot Brace Mountain.

With temperatures above 90 degrees and humidity thick that July 4th weekend afternoon, crews at Taconic State Park faced a half-mile hike up the mountain to reach the victim, who could not walk after injuring his head and extremities in a fall on a steep trail.  Initial reports also indicated the man was on blood thinning medication, which could make his bleeding harder to stop.

Setting out from the trailhead, the crew included myself, members of the local Millerton Volunteer Fire Department, an emergency medical technician, two forest rangers from the state Department of Environmental Conservation, and members of the Northwest Connecticut Rope Rescue Team. With about 300 pounds of ropes and hardware for the crew to carry, the hike in took about 45 minutes.

Some five grueling hours later, crews had carried and lowered the 125-pound victim hundreds of feet down the mountain, with the help of the stout ropes, a metal basket, and a piece of equipment called a stokes wheel. A stokes wheel is a single ATV tire that clips to the sides of a metal rescue basket, making transportation on rough terrain more comfortable for the patient and easier on rescuers. The victim was then airlifted to a local hospital with non-life threatening injuries.

This is not the first occurrence of this type of injury on this trail. Earlier that year, a hiker had fallen on the icy trail and injured his ribs, requiring rescue crews to carry him out on a stokes wheel. A few years earlier, another visitor fractured his leg while slipping on leaves and was airlifted off the summit of Brace Mountain after being carried by crews for more than a mile to a suitable landing zone.

As park attendance continues to rise, and social media convinces more potential hikers to head for the backcountry, we are seeing an increase in patron injuries and so-called ‘technical’ rescues in our State Parks. Such rescues are becoming more common at places like Taconic State Park and Hudson Highlands State Park in the Taconic Region, Minnewaska and Bear Mountain State Parks in Palisades Region, John Boyd Thatcher in Saratoga Region and Letchworth State Park in Genesee Region.

People fall while taking selfies, slip while wearing improper footwear, or enter hazardous and closed areas of our parks. Some patrons fail to dress for the weather, do not bring flashlights or maps, fail to bring enough water and are generally unprepared to hike some of the terrain our beautiful parks offer. The mighty cell phone has made many of our patrons more confident knowing help is only a call away. This false confidence has started to put a strain on park resources along with surrounding first responders who are constantly being called to parks for injuries, and search and rescues.

The drills include using Incident Action Plans and the Incident Command Structures we all learn in our classes as park managers. By drilling, we get to practice putting together planning documents and working with Incident Commanders who coordinate with park officials on such emergencies. We gain valuable facetime in a non-emergency atmosphere where we can dissect our pre-planning and offer each other suggestions and advice.

In late October, staff at Taconic State Park held a Joint Rope Rescue drill that brought together over a dozen responding agencies from two states and three counties. The drill was a mock exercise that practiced communication between different departments, navigation and various rope rescue skills and strategies.

We also review our rescues to learn not only what we did right but more importantly, where we can improve. One lesson from the July 4th incident is that we will now use staging areas for motorized UTV’s that shuttle rope gear to a pre-planned location near the summit of the mountain so that heavy equipment no longer needs to go uphill with rescuers on foot.

By using motorized vehicles to bring heavy gear above where a rescue has to happen, rope crews only have to carry this equipment downhill, which saves more of their energy for when they reach a victim. It takes a few more resources to do this but ultimately increases the efficiency of getting equipment to the injured hiker.

Also, we have established multiple hoist locations in the area, so if available, a helicopter can save us the time and effort of carrying and building lowering devices with ropes and hardware in the field. This will not always be available, but it is another tool that we can use to make rescues faster and safer.

All parks are required to have an All Hazards Emergency Action Plan. However, some emergencies in our parks require more planning than the normal fire drill or patron with heat exhaustion. Some potential emergencies require park managers to meet with local first responders on a regular basis to enhance the speed and efficiency of their response.

No matter what size the park or historic site, it is always essential to have an open line of communication with the local fire chief, rescue squad and Park Police so that the one day they are needed, they know your face and who you are. It just makes things easier – and ultimately safer – for the thousands of visitors who use the trails in the rugged regions of our State.

All pictures courtesy of NYS Parks

2 thoughts on “Ready At The Rope”