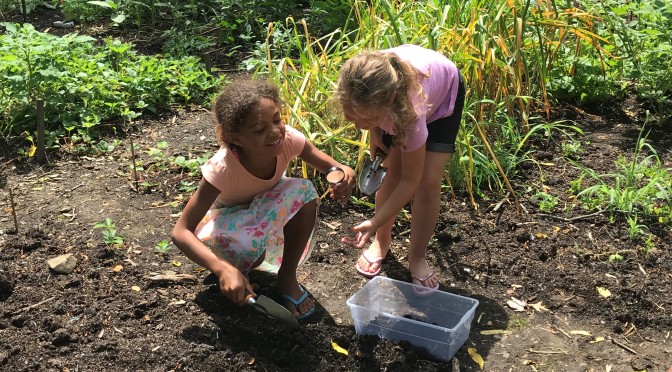 “Can we plant a cake tree?”

The question caught me off guard.

“You know, like a cake tree. Or a cheese tree.”

It’s a chilly afternoon in mid-April several years ago, one of those sunny days that invites you out into the garden, but then leaves you shivering. It had been warm standing next to the bus as the Harvesting History Club disembarked at Clermont State Historic Site in Germantown, Columbia County, but soon we were in the dirt, one with the Earth, as spring arrived. Doing the digging were a dozen or so elementary school students, our garden educator Leslie, and me.

I was assisting one of the youngest students as she methodically planted her tiny seedlings and asked me questions. I handed her another seedling, a cool-weather vegetable she’d planted in a tray weeks earlier. Just like her, before the new semester began I knew next to nothing about plant. But I did know that cakes and cheese did not grow on trees.

“Oh,” her lips pursed at my answer. She took the kale and gently patted it into the dirt.

I pointed to a wild tangle of leaves and vines, already vying for dominance in the far corner of the garden. The strawberries wouldn’t be ready until June, which she wasn’t thrilled about. But she perked up moments later, when another student discovered a cool bug and everyone ran to see it.

Clermont has a centuries-old garden history. The mansion has stood since colonial times — when growing and harvesting was an essential part of life. One of the wealthiest families in early America, the Livingstons of Clermont grew most of their own food and took in significant farm contributions from their tenant farmers. Clermont Livingston (yes, they named their son after the house) kept weather journals detailing growing and harvesting on the manor from the 1840s through the 1890s.

Through the early 20th century, most of the mid-Hudson Valley was agrarian, with vast farms, orchards, dairies, and kitchen gardens populating the landscape.

Today, most people in the area are living on land that was farmed within the last century. With all of this in mind, it’s a little startling how many of us live so close to nature but are so disconnected from it.

To help reintroduce and reestablish that tie, Harvesting History began at Clermont in 2014, spearheaded by Site Manager Susan Boudreau and Garden Educator Leslie Reed. The purpose of the program is to connect Hudson Valley kids with their history and engage them hands-on by working in the garden. As they learn about seeds, plantings, and garden care, they also learn about healthy eating, the history of their home, and the natural world.

It’s amazing how many students start the program with no knowledge of where their food comes from or how it’s made. It’s not just young kids, like the little girl and the cake trees, but teenagers and young adults. I was 23 when I started working with the program and had no concept of growing seasons or how to plant something.

It’s a blind spot that our parents and grandparents would not recognize, brought on by refrigerated trucks and supermarkets where you can buy tomatoes and avocados at any time of the year. By planting heirloom vegetables in the chilly spring air, students don’t just begin to understand the seasons, they begin to understand meteorology, biodiversity, and entomology.

Harvesting History has become quite popular. When I was first out in the garden in 2014, talking about cake trees and planting kale, we were serving 100 students annually. In 2018, we served 800 and we had even more students in 2019. The program is often on the road, visiting after-school programs, libraries, and schools, working on their own gardens and learning about healthy eating.

We do garden crafts, like making your own weather journal.

We even have this amazing bike blender we use to chop up herbs and veggies. Bike blender salsa is my absolute favorite way to make salsa now.

This last spring, our little kitchen garden was expanded to 2,500 square feet, allowing for more students to visit and experience some hands-on history.

And to dream more dreams of cake trees.