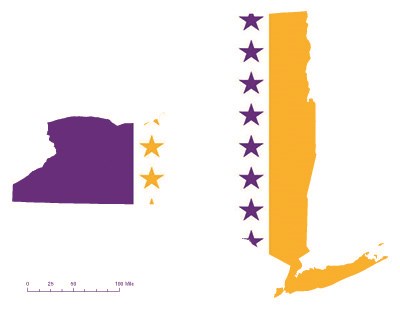 Women’s history has played a prominent role in the story of New York State, and some of these stories can be told through State Parks and Historic Sites.

In honor of Women’s History Month in March, the falls at Niagara Falls State Park will be illuminated March 7 in the historic suffragist colors of gold, white and purple starting at 6 p.m., and continuing on the hour through 11 p.m. The colors were the symbol of the National Woman’s Party, which advocated for women’s right to vote in the early 20th century.

According to a 1913 statement by the union, “Purple is the color of loyalty, constancy to purpose, unswerving steadfastness to a cause. White, the emblem of purity, symbolizes the quality of our purpose; and gold, the color of light and life, is as the torch that guides our purpose, pure and unswerving.”

Here in New York, State Parks events and programming will bring some of these stories to life include:

And there are numerous State Historic Sites and Parks with links to women’s history that are outlined below.

Ganondagan State Historic Site – 7000 County Rd 41, Victor, NY 14564: The women of the Haudenosaunee (Iroquois) lived in a society that afforded them a level of equality and freedom centuries before similar rights would be given to other women in the United States. Haudenosaunee women of the Seneca, Cayuga, Onondaga, Mohawk, and Oneida chose their chiefs, owned and managed their own property, and held key political positions. When women in New York State began to organize to demand their rights, the Haudenosaunee provided a model of equality. Learn more here.

Clermont State Historic Site – 1 Clermont Avenue, Germantown, NY 12526: Alida Schuyler Livingston was the matriarch of an influential early American family, but she was also a powerful businessperson in her own right who, along with her second husband, exerted significant political and economic influence in Colonial New York. She was part of a larger tradition of Dutch entrepreneurial women in the early colony that thrived thanks in part to the equal economic rights afforded to men and women under Dutch legal tradition. Learn more about her here and here.

Johnson Hall State Historic Site – 139 Hall Avenue, Johnstown, NY 12095: Known at different times of her life as Konwatsi’tsiaienni and Degonwadonti, Molly Brant was a Mohawk woman likely born sometime around 1736 and grew up near what is now Canajoharie, Montgomery County. By the age of 18, Molly was already beginning to participate in local politics and likely met Sir William Johnson, the royal English representative to the Native People of the Mohawk Valley, as she interacted with leaders in the area. Eventually, she and Johnson would become romantically linked and Molly would have eight children with him while living at his estate, Johnson Hall. She spoke her native Mohawk and dressed in the Mohawk style all her life and, after Johnson’s death, Molly would return to the Mohawk and lead as a Clan Mother during the turbulent Revolutionary War period. Learn more here.

John Brown Farm State Historic Site – 115 John Brown Road, Lake Placid, NY 12946: Abolitionist John Brown’s raid on Harper’s Ferry before the Civil War earned him a prominent place in history books, but the contributions of his daughter, Annie, have been overlooked for more than a century. Committed to the freedom of the enslaved, Annie served as a lookout for the conspirators leading up to the raid on an armory in Virginia, and was vocal in the shaping of her father’s legacy in public memory, speaking stridently against depictions of him as “mad.” Learn more here and here.

John Brown Farm remains as an historic site today in part due to the actions of another New York woman: Kate Field. Field was an American journalist, editor, outdoorswoman, and actress who helped to purchase the farm eleven years after the 1859 raid in order to preserve it “as a public park or reservation forever.” Learn more about her here.

John Jay Homestead State Historic Site – 400 Jay Street, Katonah, NY 10536:Founding Father John Jay would serve New York as governor and the country as its first Chief Justice, but his daughters had a strong hand in managing his household and estates. Learn more about the Jay women here.

Jay Heritage Center – 210 Boston Post Road, Rye, NY 10580: The Jay family also owned an estate in Rye, New York, where young John Jay was raised. The land remained in the family for generations and was vital in inspiring one of America’s first female landscape architects, Mary Rutherford Jay, John’s great-great granddaughter who began her practice at the turn of the 20th century. Learn more here and here.

Lorenzo State Historic Site – 17 Rippleton Road, Cazenovia, NY 13035: The Federal-style mansion at Lorenzo looks out onto a garden designed in 1914 by Ellen Biddle Shipman, a woman pioneer of landscape design, to enhance her father’s garden layout with more formal perennial beds. In 1983, restoration was begun following that 1914 plan and today the garden and grounds are available to the public and are often used for wedding ceremonies and receptions. The Lorenzo grounds are open year-round. Plan your visit here.

Oriskany Battlefield State Historic Site – 7801 New York 69, Oriskany, NY 13424: During the Battle of Oriskany in the Revolutionary War, Oneida womanTyonajanegen (Two Kettles) accompanied her husband Han Yerry Tewahangarahken into battle, reloading his musket for him after he was wounded. She was known for her valor and her skills as a horsewoman, riding quickly to Fort Schuyler to warn of a coming attack. Learn more here.

Here is one such story, of U.S. Army Sgt. Cari Anne Gasiewicz, a native of Depew, Erie County. Sgt. Gasiewicz served two tours in Korea, where her aptitude for languages prompted her superiors to send to study Arabic at the Defense Language Institute Foreign Language Center. During Operation Iraqi Freedom, she served Iraq as an Arab language linguist with a military intelligence unit.

When her unit was being redeployed from Iraq to Kuwait, she volunteered to drive a supply truck rather than leave via aircraft. On the drive, her vehicle was hit by two I.E.D.s. (improvised explosive device) killing the 28-year-old  on 4 December 2004. In her honor, the Defense Language Institute, located at the Presidio of Monterey in California dedicated Gasiewicz Hall in her name. It is the first building there named for a woman.

Schuyler Mansion State Historic Site – 32 Catherine Street, Albany, NY 12202: The success of the Hamilton musical has generated quite a bit of public interest in the Schuyler family history. Learn about Angelica Schuyler’s contributions to military intelligence on the patriot side during the Revolutionary War here. Learn about the stories of enslaved women at the mansion here. Tours of the restored mansion can be reserved in advance here.

Bear Mountain State Park – Palisades Parkway or Route 9W North, Bear Mountain, NY 10911: Considered Colonial America’s first female botanist, Jane Colden (1724-1760) grew up on her family’s farm west of Newburgh. Orange County. After showing an early interest in plants, she went on to write her own Botanical Manuscript describing over 300 native flora. At the end of March, the park will unveil a hand-painted sign detailing Colden’s contribution to botany in the Hudson Valley. It will be located at the Jane Colden Garden at the park’s Trailside Museums and Zoo.

Staatsburgh State Historic Site – 75 Mills Mansion Drive, Road #1, Staatsburg, NY 12580: Ruth Livingston Mills, scion of the wealthy Hudson Valley Livingston family, was a dominating presence in the upper class social circles of the Gilded Age, entertaining from her grand Staatsburg mansion on the Hudson River in Dutchess County. Learn more here about a mysterious artist who painted the portrait of Ruth Livingston Mills and its connection to the suffrage movement for women’s rights.

Letchworth State Park – Castile, NY, 14427: While preservation of the park’s scenic beauty and historic assets is the work of William Pryor Letchworth, his right hand in preserving “The Grand Canyon of the East” was his indispensable secretary, Caroline Bishop. She worked with Letchworth for 27 years, living at the Glen Iris estate with him and the rest of his staff and, after his passing, became the park’s first superintendent and Librarian/Curator of the park’s museum.

Letchworth also was the setting for the story of Mary Jemison, a Scotch-Irish colonial woman adopted by the Seneca during the French and Indian War. She later gained notoriety after writing a memoir of her life. After her death, her body was reinterred near the historic site of a Seneca council house, now within Letchworth State Park.

Saratoga Spa State Park – 19 Roosevelt Drive, Saratoga Springs, NY 12866: Grace Maguire Swanner graduated from Albany Medical College in 1933 and devoted much of her life outside of private practice to helping to preserve the park’s Lincoln and Washington baths. Dr. Swanner was named acting medical director of the spa in 1953, began a school of massage as a training facility for the spa, and  later wrote  a book detailing the geologic and sociologic history of the park called “Saratoga Queen of Spas”.

The State Parks Blog also has recent posts on women in New York State history, including Beatrice Mary MacDonald,  a World War I nurse who became the first woman to be awarded the Purple Heart; Annie Edson Taylor, a Finger Lakes native who became the first person to survive a plunge over Niagara Falls in a barrel; noted African American abolitionist and suffragist Sojourner Truth; and even anti-suffragists in New York who allied with efforts to deny them from obtaining the vote.