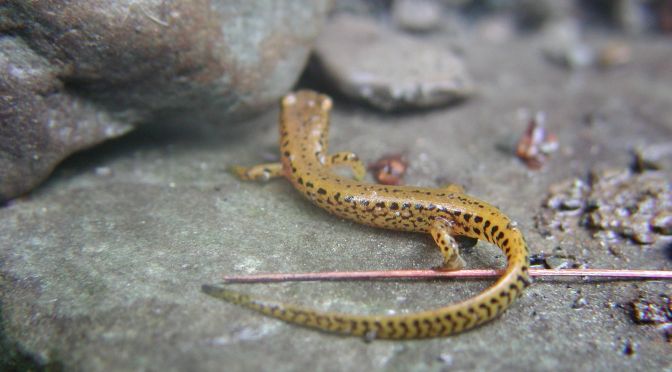 2014 is the Year of the Salamander! New York State Parks is coordinating with the Partners in Amphibian and Reptile Conservation (PARC) to raise awareness of salamanders and aid in the effort to improve global salamander conservation, education, and research efforts.

Visit PARC online to learn more about this organization and about the Year of the Salamander, and visit our Facebook page each month for a blurb about salamanders in NYS.

NYS Parks is celebrating Earth Day 2014 with the official launch of our blog, Nature Times, produced by the New York State Office of Parks, Recreation, and Historic Preservation. While you can find all the information you need on the locations, amenities, and policies of state parks at the official NYSParks.com website, this blog will provide information on the ongoing projects, programming, recent wildlife sightings, and general subjects of interest that relate to the New York Parks system. For our first post, we’d like to look forward to the new growth that comes in the early spring.

Each year, as the snow begins to melt and it seems like warm weather is right around the corner, the spring ephemerals push their way out of the cold, muddy ground and give us the first glimpse of spring color at the end of the long, grey winter.

The spring ephemerals are a group of perennial plants that emerge in early spring for a short period of time in which they grow, reproduce, and then die back down to their roots until the next year.

The adaptive strategy of spring ephemerals is most common in deciduous forests because it allows small plants to take advantage of the high levels of sunlight that reach the forest floor before all the trees regrow their leaves.

Click on the pictures in the photo gallery to get a closer look at a few of the spring ephemerals  we can find in New York State Parks in the coming months, and as you’re watching outside for the appearance of spring flowers, don’t forget to check for new posts each week on NYS Parks Nature Times!

It’s certainly been cold this winter, but current low temperatures, combined with the recent effects of the polar vortex, may deliver unexpected benefits this spring. Foresters and scientists in New York have been fighting against the rapid expansion of the Emerald Ash Borer, an invasive insect which kills ash trees in alarming numbers. The long winter freeze may provide a much-needed advantage against these tiny invaders.

The emerald ash borer is a beetle which arrived in the United States on untreated wood pallets used for shipping from China. In Asia and Russia, the emerald ash borer is kept in check by predators and the natural resistance of ash trees which have had thousands of years to adapt defenses against this parasitic insect. American ash trees, however, have no defenses against this exotic species.

Emerald ash borers kill ash trees by boring underneath the bark into order to lay their eggs. Once hatched, larva feed upon the tree’s living tissue, killing it slowly over the course of 2-3 years.

In wintertime, ash borer larva shelter underneath the bark of ash trees, however, extreme cold temperatures, like we have been experiencing, can freeze the larva even underneath the bark layer and slow down the population growth of this pernicious pest. However, it takes more than just a few hours below zero in the morning to hurt EABs, but sustained sub-zero temperatures could potentially kill a significant portion of the Emerald Ash Borer population. Because EAB larvae shelter deep under the tree’s bark at the base of the trunk and even in the upper roots, where a snow layer can keep them insulated from extreme cold and the tree itself regulates their temperature, they are relatively adept at surviving in cold climates.

For example, this winter at Taughannock State Park near Cayuga Lake, the temperature was never recorded below -8°F (-22°C) and we found Hemlock Wooly Adelgid, another pernicious invasive insect, mortality to be about 88%. On the other hand, at Mine Kill State Park in the northern Catskills, temperatures got to -24°F (-31°C) and we found only about 72% mortality.

For this reason, we can expect the polar vortex to temporarily slow down the expansion of EAB, but management and surveying efforts will continue to be necessary into the future.

Bats in Hailes Cave at J.B. Thacher State Park have been kept safe all winter long thanks to a bat gate installed by State Parks staff along with volunteers from the Northeastern Cave Conservancy and staff from the DEC. Hailes Cave serves as the winter hibernation site, or hibernaculum, for at least two species of bats. However, since the 1980s the population of bats in Hailes Cave, as well as other hibernacula throughout New York, has been in decline. Most recently, bat species in the North America have been afflicted with the outbreak of a rapidly spreading fungal infection which produces white nose syndrome, a condition which has decimated bat populations as threatens multiple bat species with extinction.

Besides white nose syndrome, recreational overuse of the cave area has been identified as one threat to the bats which can be easily mitigated. Frequent visitation to the cave, particularly between October and April, can disturb the bats during a time when they need to conserve their energy into order to survive until it is time for their spring emergence in April. The bat gate at Hailes Cave will protect the bats home during the winter while setting the stage for allowing patrons summer access to the cave through a permit system in the future, as was recommended in the park’s recent Master Plan.

While the bat gate will keep curious visitors out of the bats’ winter home, the horizontal position and spacing of the main bars allow the bats to pass in and out easily. Each of the horizontal bars weighs more than 190 pounds and, over the course of three days, workers and volunteers moved over 3,000 pounds of steel from the top of the escarpment to the gate location 75 feet back into the cave at the base of the cliff! A huge thank you to the NCC and the DEC for their help protecting our State Parks’ natural resources!