When Franklin Delano Roosevelt (FDR) became president in 1933, the entire nation was in a state of turmoil never seen before or since. It was the height of the Great Depression: unemployment was at 25%, croplands were failing, and millions of families were going hungry. As governor of New York State, FDR had implemented the Temporary Emergency Relief Administration which put thousands of young men to work reforesting one million acres. Within his first one hundred days of his presidency FDR enacted the Civilian Conservation Corps, a national work program which gave men ages 17 to 28 unskilled labor jobs in infrastructure. The young men were paid $30 a month, $25 of which had to go home to their families. By the end of the program nine years later, over three million men from all fifty states had made significant improvements to the nation’s road system, planted three billion trees, and built thousands of facilities in state parks. The CCC had a major impact on New York’s state parks, with many of the structures remaining today.

The CCC was active at Fair Haven Beach State Park from 1934 to 1942. The young men employed by the Corps built roads, cabins, service buildings, and created barriers against waterfront erosion from Lake Ontario. Park manager Jerry Egenhofer says: “The establishment of the CCC – with their readiness to lend assistance with personnel, built in financial aid, and their readily accessible materials – aided greatly in expediting and promoting the park’s development and growth.”

A CCC company of Spanish-American War veterans built cabins, service buildings, roads, trails, the boathouse, the golf course, and the golf clubhouse at Green Lakes State Park. The men transferred tons of sand from Oneida Lake to create the beach in the park.

Allegany State Park can also thank the CCC for many elements of the current park, including bridges, roads, camp sites, trails, and the ski area. The CCC also worked on wildlife conservation projects, including reforestation and stream bank retention.

At Bear Mountain State Park, both the Perkins Memorial Drive and Perkins Memorial Tower – named after the first president of the Palisades Interstate Park Commission – were built by the CCC between 1932 and 1934. On a clear day, four states and the Manhattan skyline can be seen from the summit.

At Gilbert Lake State Park the CCC constructed cabins, trails, roads, dams, and erosion control structures between 1933 and 1941. The park is also home to the New York State Civilian Conservation Corps Museum, which displays photographs and artifacts from the days of the CCC. 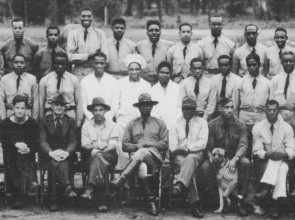 Facing mounting controversy over racial integration, the CCC director Robert Fechner decided to segregate the camps in 1935. The “colored” CCC company at Newtown Battlefield hosted black educators and medical officers, and following complaints from the National Association for the Advancement of Colored People (NAACP) and other advocacy groups, the CCC appointed black officers to command the camp.  The men built cabins, restrooms, ball fields, and the picnic pavilion.

The CCC contributed to many more projects at other state parks and historic sites not featured in this article. Without a doubt, the efforts of the CCC members created the foundation of New York’s incredible state park system, and their legacy deserves to be remembered and honored.

Civilian Conservation Corps in the Finger Lakes, Part 1. Walk in the Park, April 17, 2014. (Includes a video with a presentation by State Parks environmental educator Josh Teeter)

“Prejudice & Pride: Civil Rights and the CCC: Company 1251-c at Newtown”. The Preservationist. Office of Parks, Recreation, and Historic Preservation, 2007.