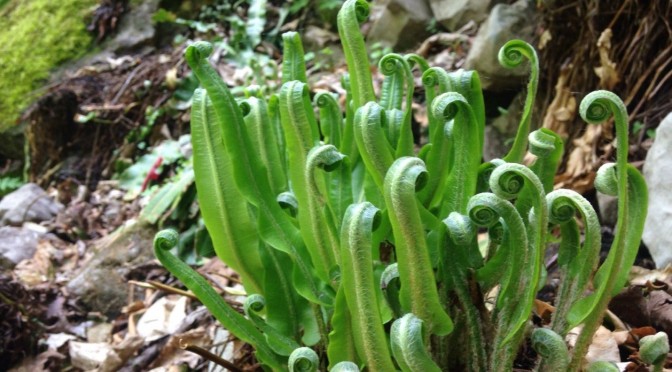 Tucked away in cracks and crevices along the steep, rocky ravines and plunge basins of Clark Reservation and Chittenango Falls State Parks resides one of the rarest and most endangered ferns in the United States; the American hart’s-tongue fern (Asplenium scolopendrium var. americanum). In fact, 94% of all hart’s-tongue ferns in New York are contained within these two Central New York State Parks!

The name “hart’s-tongue” was given to this unique plant due to the resemblance of the fronds (leaves) to the tongue of an adult red deer, also known as a “hart.” The “American” moniker was placed in front to distinguish the North American variety from its closest relative, the European hart’s-tongue fern, which is common throughout much of Europe and the United Kingdom.

Few people are likely to ever encounter this unusual looking fern in the wild due to the rugged nature of its unique habitat. Those who are fortunate enough to gaze upon the strange fronds of a hart’s-tongue might have a reaction similar to that of American photographer Dr. H. E. Ransier in 1926:

“Richer than millionaires! Happier than Kings! Envied by multitudes! May be said of hobnobbers with Hart’s-tongues.”

Dr. Ransier’s enthusiasm for the hart’s-tongue fern is one that has been shared by countless students, botanists, pteridomaniacs (fern enthusiasts), nature lovers, and park patrons alike over the 211 years since its discovery just outside of Syracuse, NY in 1807. Additional hart’s-tongue populations have since been discovered in Ontario, Canada, the upper peninsula of Michigan, and a few unusual relicts in southern Tennessee and northern Alabama. However, the loss of several populations due to limestone quarrying, deforestation, urban expansion, and illegal collection resulted in the placement of the fern on the United States Endangered Species List in 1989. Currently, drought induced by climate change and invasion of the habitat by non-native plants also threaten many hart’s-tongue populations.

Hart’s-tongues are extremely sensitive to changes in climate and have very specific habitat requirements. They are most often found on steep, rocky, moss-covered slopes with north to east aspects in partial to full shade. The soils are well-drained and rich in calcium and magnesium. Hart’s-tongue researchers in New York have found that these habitats remain significantly cooler and more humid than immediately adjacent forests. The availability of quality habitat is critical to the growth and reproduction of the ferns. Very few of these types of habitats exist in New York State, which is why conservation of the habitat of the ferns is essential for their recovery.

New York State Parks has become increasingly involved with hart’s-tongue fern conservation over the last 10 years. Seasonal teams of FORCES stewards (Friends of Recreation, Conservation, and Environmental Stewardship), affectionately referred to as “The Fern Crew”, have carefully dug out hundreds of thousands of invasive plants from Clark Reservation and Chittenango Falls State Parks in an ongoing effort to protect the fern’s very sensitive and rare habitat. The Fern Crew is largely made up of college interns pursuing degrees in conservation biology or related fields and is overseen by Park staff.

In 2015, after 100 years and several failed reintroduction efforts by various organizations, researchers were successful in reintroducing greenhouse-propagated hart’s-tongue ferns into the wild! As a result, two existing populations were expanded and New York State’s first new hart’s-tongue population was created! Reintroduction efforts were led by the SUNY College of Environmental Science and Forestry in Syracuse, NY and New York State Parks, working closely with the U.S. Fish and Wildlife Service and the NY Natural Heritage Program. The FORCES program contributed many hours of labor to make this project a success.

Future plans to continue propagation of hart’s-tongues are currently in the works at one of only two greenhouse facilities within the New York State Park’s system, Sonnenberg Gardens and Mansion State Historic Park in Canandaigua, NY. In a remarkable historical twist, the greenhouses at Sonnenberg Gardens were built by the very same woman who donated Clark Reservation State Park to New York State in 1915, Mary Clark Thompson. Keep your eye out for the amazing American hart’s-tongue fern at Sonnenberg Gardens in the coming years, as it may be your only chance to catch a glimpse of the fern that has enchanted generations of enthusiasts!

Click here to learn more about this rare fern.

All photos by Mike Serviss (New York State Parks), except the photos of Mary Clark Thompson and Sonnenberg Gardens, which were obtained from https://www.sonnenberg.org/