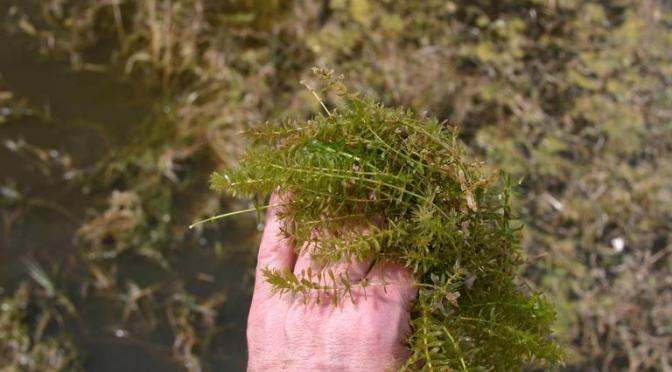 Hydrilla is one of the highest priority invasive plants in New York State.  It outcompetes native plants and causes destruction in our aquatic habitats. It can invade the deeper waters where many of our natives cannot and can aggressively grow up to an inch per day. This allows hydrilla to form thick mats at the top of the surface blocking sunlight for the native plants below.  Oxygen is then depleted leading to a decrease in the amount of oxygen in the water and potential fish kills. Sportfish weight and size can decrease due to the loss of open water and natural vegetation and their spawning habitats can be eliminated by hydrilla. The species also causes obstructions for boating, swimming, and fishing. The large dense mats of vegetation can cause property value to decrease, creating problems for homeowners and communities. Hydrilla not only affects our native habitat but also our local communities and businesses.

Hydrilla is a perennial plant. It grows in springs, marshes, lakes, canals, and rivers. This plant can tolerate low and high nutrient conditions and up to 7% salinity. There are two kinds of hydrilla; a southern population which is comprised of mostly dioecious females (meaning the plants only have female flowers), and northern populations which are monoecious (meaning the plants have both male and female flowers).  The dioecious females overwinter as perennials. The monoecious plants set fertile seed and depend on their tubers for overwintering. Hydrilla can reproduce four different ways, including fragmentation, tubers, turions, and seeds. Fragmented pieces with one node are able to sprout into a whole new plant. Tubers are formed on the rhizome of the plant and each one can produce up to 6,000 new tubers! These tubers can lay dormant for over four years before sprouting into a new plant. Turions, or dormant buds, form in the leaf axil of the plant and then break off and settle into the sediment to produce a new plant. Seed dispersal is the least important reproductive method for the species and is often facilitated by ingestion and subsequent dropping of migratory birds. These plants can grow in low light conditions, deep depths and can photosynthesize earlier in the morning than their native competitors. At its beginning stages it can grow up to an inch a day until it reaches the surface of the water.

Identifying hydrilla can be very tricky at times because it looks similar to a native plant, American elodea, and another invasive plant, Brazilian elodea. There are a few distinguishing characteristics that set hydrilla apart from the other two aforementioned species. The leaves are 5/8 inches long and they grow in whorls of 3-10, 5 leaves per whorl being most common. The leaves have distinct serrated edges. A key feature is the dull-white to yellowish, potato like tuber that grow 2-12 inches below the sediment.

Hydrilla is thought to have originated from the island of Sri Lanka and possibly the southern mainland of India, but it arrived in the United States from Korea as a popular aquarium plant. Colonies were first identified in canals in Miami and Tampa, Florida. Hydrilla fragments made their way up to New York by attaching to boats, their trailers, and live wells. Boat motors, oars, and other equipment break the plant into fragments, facilitating its spread throughout the affected water body and into nearby water bodies that are hydrologically connected. Hydrilla can spread between water bodies that are separated by geographic distance by “hitching a ride” on watercraft trailers and other recreational equipment. The first time hydrilla was discovered in New York was in August 2011, when Jordan Stark found the species in Cayuga Inlet in the Finger Lakes In September of 2012, the species was found in the Erie Canal in North Tonawanda by a U.S. Fish and Wildlife biologist. It has also since been found in Long Island, including Caleb Smith State Park Preserve in Phillips Mill Pond. Since the introduction of hydrilla in New York, a coalition of partners, which includes many state agencies, non-profit organizations, and businesses have taken quick action to help prevent its further spread. After a population of hydrilla is found, partners mobilize resources to conduct a focused education and outreach campaign and survey the area where hydrilla was found to understand the full extent of the population. Once surveying is completed a management plan is implemented, which includes aquatic herbicide application. To learn more about best management practices, please go to http://hydrillacollaborative.com.

Want to help manage this unruly aquatic plant? Learn how to properly identify hydrilla. If you think you found hydrilla take pictures, mark your location, and contact your regional DEC office or submit your observation with pictures on the iMapInvasives mobile app or website. Also, it is important to clean, drain, and dry your boats and any fishing or recreational equipment!