Origin: Native to China and Japan and was first observed in New York City in 1905. It is believed that it was unintentionally introduced from Japan.

NYS Presence: Elongate hemlock scale (EHS) is present throughout the state, with the highest density within a 185 mile radius of New York City.

Identification: EHS is an armored insect most commonly found on the underside of hemlock needles. They show up as small (1.5-2 mm) and flat brown or white patches that hide the female and male insects, respectively. Underneath the brown scale, you may find the tiny yellow eggs.

Life Cycle: “Crawlers” hatch from eggs under the female scale and emerge in the spring and summer. At this point they are mobile and can crawl to a new needle or be transported by wind or birds. Once they find a suitable site for feeding, they burrow under the waxy cuticle of the needle for protection, and insert their feeding tube into the mesophyll cells of the needle, just under the epidermis or surface layer of cells on the needs. The females will never leave this site as they go through their three stages of development. The males, however, will emerge from their five stages of development as winged adults. They will fly to a mature female, mate, and die without ever feeding. EHS overwinters either as fertilized females or eggs (typically 16-20 are laid). (Jill Sidebottom, Elongate Hemlock Scale, ncsu.edu).

As EHS feeds on the hemlock needs they remove the plant’s nutrients, the needles take on a yellow color as they dry out and drop, leading to branch dieback and ultimately death in as little as ten years.

Control: One option of control is to remove highly infested trees. EHS can also be controlled chemically. The two most consistent chemical controls for EHS are Safari (a neonicotinoid) and Talus (an insect growth regulator). Safari is also used to control hemlock wooly adelgid, another invasive pest from Japan that often appears alongside EHS as white wooly ovisacs on the underside of hemlock needles. EHS can also be treated with biological agents, such as the parasitic wasp Encarsia citrina, and predatory beetles like the twice-stabbed ladybird beetle, Chilocorus stigma and Microweisea misella (Mark S. McClure, The Connecticut Agricultural Experiment Station). These biological controls have provided inconsistent results and are also susceptible to pesticides, so pesticide should be applied with that in mind. To report sightings of EHS in New York State Parks, visit  iMap Invasives or for other questions regarding invasives, email the Invasive Species Management Team at invasives@parks.ny.gov 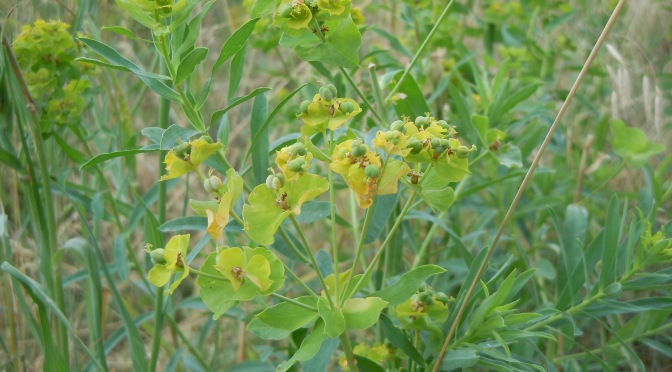 NYS Presence: Leafy spurge has been identified in more than 15 counties across the state. It is found in grasslands, meadows, and riparian areas.

Species Profile: Leafy spurge is a perennial plant that spreads by both seed and its extensive root system. These roots have little pink buds that produce new shoots or roots. The root system can reach depths of 30 feet into the soil, making it a tough invasive to control.The leaves are narrow and linear with lengths as long as 4 inches. They are arranged alternately on the pale green stems of the plant.

Two key characteristics to look for when trying to identify leafy spurge are:

The leafy spurge’s ability to spread at a fast pace make this invasive plant highly competitive. Dense stands will often smother or shade out other native species, therefore decreasing biodiversity. This species is a threat to native grasslands, meadows, and agricultural lands. Although cattle are not particularly fond of leafy spurge, sheep and goats have been known to snack on it and spread the seeds around in the process.

Origin: Mugwort is native to Europe and Asia, where it was utilized as a medicinal and culinary herb. It was introduced to North America through ship ballast and continues to spread across the continent via nursery stock, turf grass and roadways.

NYS Presence: Widespread throughout the state and often found in ditches, roadsides, pastures and other disturbed areas.

Species Profile: Mugwort is a perennial that flowers in late summer to early fall. Its alternating dark green leaves are smooth on top and have silvery-white hairs underneath. When the foliage is crushed it is known to release a pungent odor. One plant can produce as much as 200,000 seeds which are roughly 1mm in diameter and are spread by the wind and easily moved around on tires, mowers and construction equipment. As a result, Mugwort can be found along miles of roadside.

Although seed dispersal plays a large role in the spread of this invasive weed, its root system is also a culprit in increase this weed’s introduction to new sites. Nursery stock including ornamental plants, turf grass, and orchard stock are easily contaminated by these root fragments and carried into new places. Mugwort’s rhizomatous roots – an extensive and dense underground network — and the abundance of seeds make this species very hard to control.

Mugwort has displaced many native plants, especially those that thrive in sunny, open habitat. Cleaning equipment, using clean fill (e.g., at construction or landscaping sites), and removing and disposing of any new infestations of Mugwort are some of the ways to reduce the spread of this plant.

Origin: This species is native to the Caucasus Mountains of Eurasia. It was brought first to Europe and the UK in the 19th century, followed by the US in the early 20th century to be used as an ornamental plant in flower gardens.

Species Profile: Giant hogweed can grow to extreme heights of 15 to 20 feet! Its robust stems are covered with dark purple colored blotches and elevated nodules. Some of these stems can reach 4 inches in diameter! Giant hogweed leaves are proportional in size, with some reaching a width of 5 feet. These leaves are compound, greatly incised, and lobed. Its flowers grow in a flat-topped formation that can be easily compared to an umbrella. This cluster of flowers can reach up to 2 ½ feet across. A few species that can be mistaken as giant hogweed are as follows: native cow parsnip, native purple-stemmed angelica, and invasive wild parsnip.

Giant hogweed is often found in wetland areas near rivers, where it is known to out compete other species for habitat. When native plants are displaced, bank erosion may also increase. This plant is labeled as invasive or noxious due to its poisonous sap. This sap contains a chemical that sensitizes the skin to UV rays. If the skin comes in contact with the sap and is exposed to sunlight, the results may be blistering, severe burns, and/or painful sores. Irritation usually appears within 1 to 3 days after the exposure. This reaction is called “phytophotodermatitis”. Follow this link to the giant hogweed hotline number and other tips for what to do if you or someone you know encounters giant hogweed. 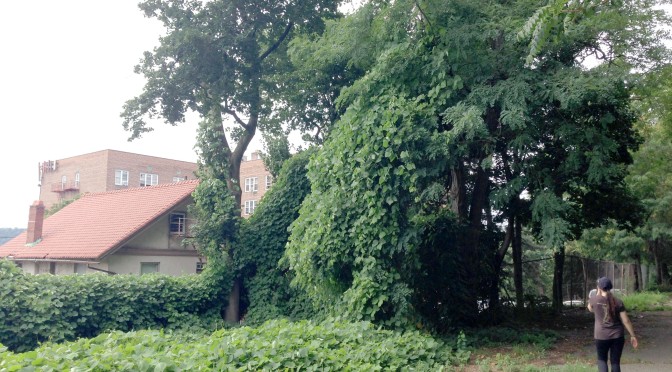 Origin: Kudzu was first introduced to the southern US in the late 1800’s as an ornamental plant to shade porches. In the early 1900s, farmers were encouraged to plant kudzu for erosion control and in the 1930’s the Civilian Conservation Corps (CCC) planted thousands of acres of it along hillsides for that same purpose. Kudzu wasn’t recognized as an invasive species by the USDA until 1953.

Species Profile: Kudzu is a perennial, semi-woody, climbing vine that can reach up to 100 feet in length! Kudzu leaves are compound (i.e., made up of three separate leaflets) and are oval to heart-shaped. In the late summer, vertically growing stems produce fragrant purple flowers that are followed by the production of hairy, brown, flattened seed pods. Kudzu can grow up to one foot per day, which makes it capable of outgrowing almost anything! This fast-growing plant competes with native trees and plants for sunlight, water and nutrients from the soil.

Note the leaves are in clusters of three, photo courtesy of Shawn Gorman, Friend of Old Croton Aqueduct.

8″ – 10″ fragrant flowers can be seen in mid-summer, photo by Forest & Kim Star, Bugwood.org

Roughly 2 million acres of forests in the southern US are covered with kudzu! Let’s prevent this from happening in NY. If found, please report findings to iMapInvasives. Take note of your location, photograph the species and then upload! 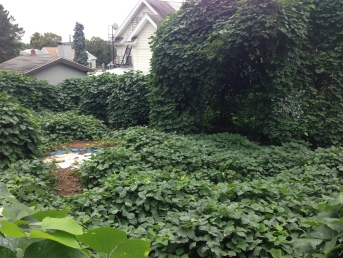 Reminder: Poison ivy is another species with three leaflets, so be sure to brush up on your plant ID before handling these species.