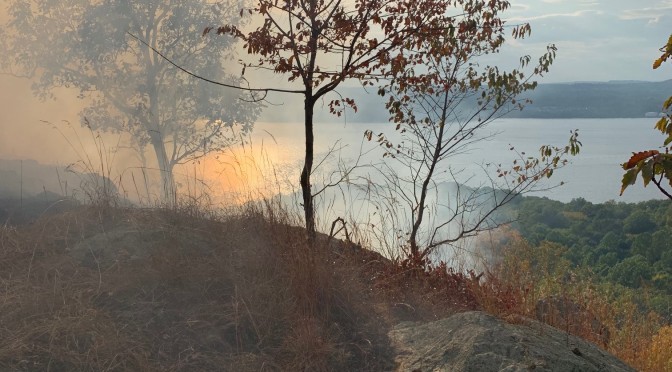 As all park managers know, times of peace and quiet in the park are only temporary.

On a Friday afternoon last month, Hudson Highlands State Park in the Taconic Region felt the transition from tranquil to full-throttle, when after a trail steward with the New York-New Jersey Trail Conference, crossing the Newburgh-Beacon Bridge over the Hudson River, noticed smoke to the south. And it was coming from Sugarloaf Mountain in the park.

It was a little after 4 p.m. on September 20 when the steward reported his sighting to State Parks. Almost simultaneously, Hudson Highlands Park Manager Evan Thompson — elsewhere in the 8,000-acre park — was told by a patron of a potential fire on nearby Breakneck Ridge. That report turned out later to be of the Sugarloaf blaze, but added to initial uncertainty over possibly having two fires at the same time.

Gathering staff to investigate Sugarloaf and knowing that recent dry conditions had increased the danger from wildfires, Thompson also called the New York State Park Police, Parks Forest Rangers, and the Department of Environmental of Environmental Conservation for assistance. He learned that DEC officers were responding to a search at Minnewaska State Park Preserve and another fire at Cranberry Mountain, both several counties distant.

After additional contact with the Park Police, DEC sent Ranger Robbi Mecus to the park. Park Police officer Jeremy Pickering arrived at the trailhead as did Mecus, with the pair leading a crew of eight on a 2.4-mile hike up 900-foot Sugarloaf Mountain. There, they found a fire covering about nine acres at the rocky summit.

A state Police helicopter was called in, dropping water drawn from the nearby Hudson four times before dark in an effort to slow the spread of the fire. The crew stayed on the mountain digging fire lines — areas where dried grass, brush, trees and other flammable materials were cut and shoveled away to create a buffer line difficult for fire to cross. The ground crew only stopped when it became too dark to see safely.

Watt also started calling State Parks facility managers at home to gather manpower needed for the next day; he soon had a roster of twenty Parks staffers scheduled to report to an 8 a.m. briefing Saturday. Meanwhile, several other agencies and organizations offered help, including the Albany Pine Bush Preserve.

A crew of more than 30 was ready to climb the mountain by that morning, coming from State Park’s Palisades Region as well as from the far reaches of the Taconic Region on the other side of the Hudson. Splitting into two teams, the crews continued the physically-demanding process of hand-digging fire lines — also called fire breaks — around the perimeter of the rugged, rocky mountain top.

At Sugarloaf, crews made these breaks by scraping the ground clean of combustible material for up to four feet, with a foot-wide, 6-inch deep cut into ‘mineral earth’ along the center of the break. Hazard trees nearby were downed, both to protect crews and prevent fire-weakened trees from falling across the fire containment line to act as a bridge for fire to spread. Digging these breaks was challenging due to the steep, rocky terrain and a thick layer of duff, which is decomposed organic material overlaying the soil.

From the air, a State Police helicopter continued dropping water gathered from the nearby Hudson River. And the fire itself was not the only hazard for those working the mountain. Crews had to watch out for fire-loosened rocks that tumbled down cliff faces without warning, as well as for rattlesnakes and ground-dwelling wasps. By Saturday evening, a preliminary line of fire breaks had been created to isolate the blaze, which by this point was estimated to cover about 14 acres.

By Sunday’s 8 a.m. briefing, the fire-fighting crew had swelled to more than 75 people, with many working to strengthen fire lines in temperatures that soared to more than 90 degrees. In some instances, their work meant abandoning a section of line that would be difficult to defend — on a very steep slope, for instance, where burning material could tumble downhill across the line to spread — and dropping back to dig a new section.

Crews also created ‘cupped’ lines by piling material on the downhill side of lines meant stop burning material from sliding over and spreading. By this time, the fire covered about 25 acres.

On Sunday morning,  a complex network of fire hoses was laid out just outside the fire line. The hoses were routed to portable tanks at locations where tanker trucks could deliver water; gasoline-powered pumps provided water pressure to the hoses. Air operations by helicopter continued throughout the day. By nightfall on Sunday, the fire lines were as good as could be expected given the difficult terrain, but hardly impregnable.

Monday dawned sunny and warm, with crewing working to improve the fire breaks. More than a mile of containment line was dug or improved on the rugged western flank of the fire, and by the end of the day, Park Rangers were confident that the lines were good. That evening, Rangers and Parks staff lit backfires on the east side of Sugarloaf to consume combustible material under controlled conditions. During the night, numerous large trees fell from roots being burned and weakened by the fire, with crews cutting trees that crossed the line.

The next day, Parks Rangers and DEC backburned privately-owned land to protect a cluster of houses at the north end of the mountain. With permission of the landowners, crews successively lit fires inside the containment lines and allowed the fires to consume burnable material. Crews then went to work to extinguish flames within 25 feet of the lines. That evening, crews again patrolled overnight to ensure that the fire remained ‘on the black side of the line.’

By Wednesday morning, Sept. 23rd, the most immediate danger had passed, although the fire was still burning inside the break lines, which by this point contained about 50 acres. Secure breaks and less combustible material inside the lines meant that the hardest work was done.

The fire was contained, with no one hurt and no homes damaged. The Wilkinson Trail to Sugarloaf summit has since reopened, although part of the trail at the summit is rerouted to avoid steep, eroded and dangerous conditions.

A smaller team remained at the mountain for several days to conduct “mop-up” operations, like corralling equipment that had been distributed over miles of trails and patrolling for sparks or breaches of the fire line.

Given the nature of the soil and the terrain, the fire was expected to continue to smolder and burn until rains finally put it out. The cause of the fire remains under investigation, although initial reports suggested it might have been an illegal campfire. State Parks rules allow fires only in designated areas under supervision by an adult.

How will the plants and animals that make up the Sugarloaf Mountain ecosystem respond and recover from this fire? Keep your eye on the NYS Parks Blog for a future post on that subject.