As the summer months wind down, the FORCES Program staff of the Central and Finger Lakes Regions are busy both reflecting on the last few months and making plans for the next academic year.

FORCES stands for “Friends of Recreation, Conservation and Environmental Stewardship”, and the FORCES Program specifically focuses on building long-term, mutually beneficial partnerships between local state parks and colleges. Currently this includes one-day volunteer events, FORCES clubs at six colleges, dozens of stewards between the two regions, partnerships with faculty members and college administration, projects in over twenty parks and historic sites, and involvement with fourteen colleges and universities within the Finger Lakes and Central Regions.

This summer has been an exciting one, with the “FORCES family” including 37 stewards and seasonal employees! The FORCES interns and seasonal employees started together in June with the first annual “Trainapalooza,” which was held this year at Robert H. Treman State Park in the Finger Lakes Region. The stewards gathered for a two day training on invasive species identification and removals, iMap Invasives training, an overview of the geologic and human histories of the area, interesting features of some of the parks, and strategies for outreach and interpretation. The group also camped overnight at the park, and got to know each other while playing Frisbee, solving riddles, and enjoying s’mores. 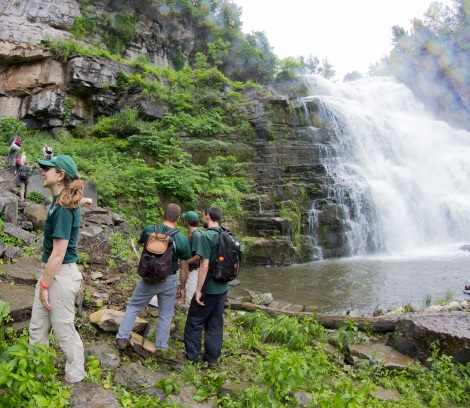 After they were trained, the stewards separated again to begin projects throughout the two regions. Many projects focused on invasive species removal; stewards worked to remove water chestnut, pale swallowwort, slender false brome, and many other species of invasive plants. Other projects included the creation of a video about the FORCES program, historical research, assistance with the ongoing surveys for the Chittenango Ovate Amber Snail at Chittenango Falls State Park, water quality monitoring at Selkirk Shores State Park, and trail blazing at Two Rivers State Park… the list goes on and on!

The upcoming academic year will bring more excitement as FORCES welcomes new and returning stewards and club members. The semester started with the New York State Fair, where FORCES annually engages the public in building bluebird boxes- they assembled 1,250 boxes just this year! To date, FORCES at the State Fair has hosted over 180 students and involved 8 colleges. Plans are also in motion for the first annual FORCES Membership Gathering, which will take place in October and combine trainings with celebrations for club members, stewards, seasonal staff, and ambassadors- all members of the “FORCES family”.

In the spring, FORCES will hold its second annual Leadership Summit, which assembles club officers and FORCES “Ambassadors” from all FORCES schools to plan and strategize for the growth of the FORCES Program. The event was a huge success last April, with the FORCES staff being (again) blown away and inspired by the passion and dedication of the students.

Keep an eye out for FORCES stewards as you visit the parks, and chat with them about the projects they are working on. They’re accomplishing big things!