As temperatures rise, spring rains roll in, and the ground thaws, the amphibians of New York are preparing themselves for a great migration. On the 10th of March, a group of about 30 volunteers congregated near Hop Field at Thacher State Park armed with flashlights and buckets. With great excitement they looked along the road edges for salamanders and frogs, hoping to help them cross the road as the amphibians migrated to woodland pools. Throughout most of the year, mole salamanders and woodland frogs spend their time burrowed under rocks and leaves on the forest floor, but each spring salamanders and frogs can migrate up to a quarter mile to woodland pools to breed. The mass migrations to the vernal pools occur during spring rainstorms with temperatures above 40 degrees.

The rain was intermittent that night, and although spring peepers and leopard frogs were escorted across the road, no salamanders were found. The migrations typically happen in late March and early April, so there is still hope! On nights when the conditions are right, many nature enthusiasts can be seen on roadways close to wetlands helping the amphibians safely cross the road. If you are interested in getting involved in preventing vehicle related deaths during these mass migrations, contact your local State Park or local DEC office. These organizations sometimes coordinate volunteers to come together on rainy nights to help salamanders cross busy roads. The more volunteers there are to help, the more amphibians will successfully breed! Before you help the amphibians, be sure to brush up on your identification! Here is a sampling of the native amphibians that you could see in New York.

The blue spotted salamander is black with pale blue flecks all over its body. It can grow from 3.5 to 5.5 inches long. They are frequently seen in woodlands. 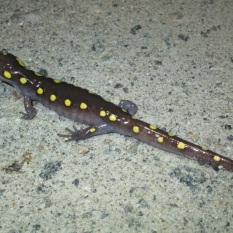 The spotted salamander is black and has yellow spots. It can grow up to 8 inches long. It is one of the most common salamanders in the area, and if you go out on a migration night there is a good chance that you will see it!

The Jefferson salamander is dark brown and has pale blue spots on its limbs and lower sides. The blue speckling is best seen on younger salamanders. It can crossbreed with the blue spotted salamander and usually grows to 4.5 to 7 inches long. This red eft/ red spotted newt can secrete poisonous toxins. When it is on land in its juvenile stage, it is orange. However, in its aquatic adult stage it is an olive brown color and has a wide paddle like tail.

The wood frog has an extremely high freeze tolerance and can live in a variety of habitats including forests, tundra, and bogs. It has the nickname “Lone Ranger” because the coloration on its face resembles a mask. Last year a bill was proposed by a class of 3rd graders to declare the wood frog the State Amphibian of New York. To see the bill’s progress check out this website. The spring peeper has large vocal sacs that it uses to create high pitched tones during the spring mating season. It typically grows to about one inch long and has a dark X marking on its back. Listen to the call of a male spring peeper. The leopard frog gets its name from the irregularly shaped dark patches on its legs and back and can grow to be 3 to 5 inches long. They were once the most abundant frog species in North America, but they suffered large population declines in the 1970s.

“Salamander Migration Extraordinaire” Check out this naturalist’s blog post  that has videos of spotted salamanders and Jefferson salamanders migrating to a vernal pool. There is amazing underwater footage of the salamanders at the breeding site!

Check out this video of Ranger Eric Powers from Your Connection to Nature to learn more information about vernal ponds and the animals that rely on them!