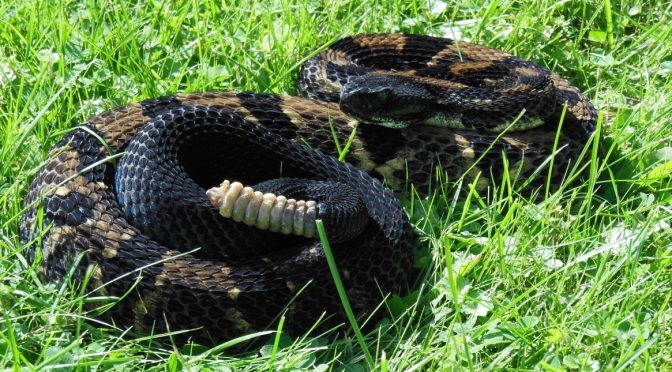 Threatened in New York State and often misunderstood, the Timber Rattlesnake is an impressive and unique species that is essential for healthy ecosystems. At an average of 3-4 feet in length and described as “stocky,” timber rattlesnakes are the largest venomous snake species in New York. They are easily identified by their broad triangular-shaped head and rattle. Like other pit-vipers, timber rattlesnakes possess a heat-sensitive organ, or pit, on either side of the head that allow them to detect prey. Their rattles are comprised of segments that accumulate each time a snake sheds its skin, which is every 1-2 years in this region. Counting the number of rattle segments is not an accurate way of aging snakes, as rattles wear and break off. Rattles are used as a warning to potential predators to stay away, making a distinct buzzing noise when rattled.

Their distinctive cross-bands allow them to camouflage themselves from unsuspecting prey as well as from predators. Rattlesnakes primarily feed on small mammals, but will also consume birds, amphibians or other snakes. They ambush prey as it passes by and inject a controlled amount of venom with “hinged” hollow fangs. They then release the animal, wait, and follow its chemical trail to consume it. Rattlesnakes play a vital role in maintaining stable numbers of prey populations, such as rodent species that can carry diseases and destroy crops.

The venom from a bite can be fatal to humans if not treated, but bites are rare. Snakes will not go out of their way to pursue or bite a person. They have the ability to sense the vibrations of an approaching creature and if it is too large to be prey, they rely on their camouflage to hide or they retreat. It requires precious energy to produce venom- Timbers will bite as a last resort if they are cornered and feel threatened. There has not been a death from a timber rattlesnake bite in New York State in several decades. In all of my encounters with these snakes, both for study purposes and chance encounters, one has never struck. While they might coil in a defensive posture and rattle as a warning, the snakes simply want to go on their way and be left alone. It is important to give them space.

These snakes will hibernate together in a den below the frost line, and it’s not uncommon for other snake species to den with them. The same den will be used for generations. They can live up to 30 years, though most live 16-22 years.  Male timber rattlesnakes reach sexual maturity at about 5 years whereas females don’t reach sexual maturity until 7-11 years. Females give birth every 3-5 years, and they are among a few species of snakes that give birth to live young. Their slower reproduction rates make them even more susceptible to the threats they face.

Timber rattlesnakes were once more abundant. Indiscriminate killing and a bounty system, as well as unregulated collecting has greatly reduced their numbers, completely eliminating them from some areas. Though the bounty was repealed in the 1970’s and they are now protected by law in New York State, they still face poaching. Snakes are purposefully killed out of a misplaced fear or disdain, or are collected for the illegal pet trade. Snakes can also be killed by vehicles while attempting to bask in roads or cross them in search of food or a mate. Timber rattlesnakes are a slower moving snake, and they tend to freeze when they sense vibration, such as that of an oncoming car. This puts them at greater risk of being run over. People have said that snakes stretched out across the road look like sticks. It’s important for drivers to be observant in order to avoid hitting snakes (or any animal) in the road, and heed animal crossing signs.

Habitat loss due to human development and frequent recreational use of land has also had a negative impact on timber rattlesnake populations. Additionally, snakes in the eastern United States are facing decline due to a deadly fungal disease. Conservation efforts are underway to preserve the few populations of timber rattlesnakes left in New York State and the habitat that supports them. Surveys are conducted and sightings are tracked to help determine the size and health of populations. Snakes are also fitted with transmitter devices for tracking and monitoring. One of the biggest efforts in the conservation of Timber Rattlesnakes is raising public awareness. By educating people about the snakes at sites where they occur, it increases safety for visitors and for the snakes. While they can pose a threat to people (similar to many other species of wildlife), these graceful animals are not bad and are not out to get anyone. They occupy a key niche in the natural community and food web and help to keep the ecosystem in balance. It is rare to encounter a timber rattlesnake in New York State because of their reclusive and docile nature. However, if you do see one, remember — as with all wildlife — to keep your distance for your safety as well as to not stress the animal. Take the time to watch from a distance to appreciate the beauty of a part of the natural world we live in. Whether snakes fascinate or frighten you, if you are walking through their home territory, it’s important to be aware. Respecting their space benefits both you and the snakes. 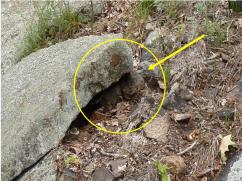 See the nose to left and body to right under the rock? Photo by NYNYP 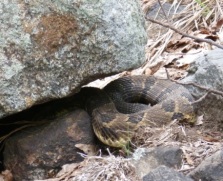