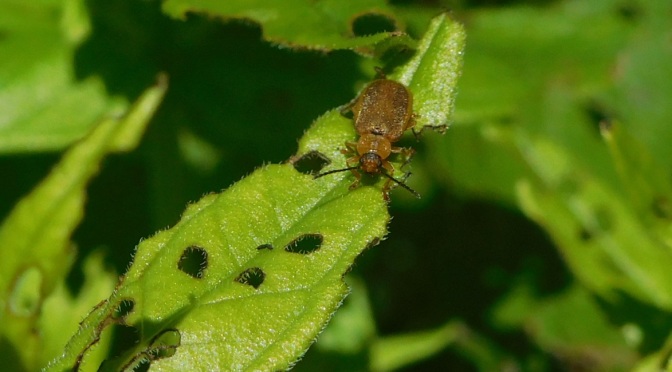 Purple loosestrife (Lythrum salicaria) is an invasive plant from Europe and Asia that can overcrowd native wetland plants. It is easily recognized by its tall and showy purple spike of flowers in the summer, lance-shaped leaves and square stems. As an invasive species, it lacks its natural predators and can spread quickly, producing as many as 2.7 million seeds a year.

Wetlands are rich habitats that support a diversity of plant, insect and animal species, such as marsh marigold (Caltha palustris,) twelve-spotted skimmer dragonfly (Libellula pulchella,) painted turtle (Chrysemys picta,) green heron (Butorides virescens.)  The introduction and spread of purple loosestrife has resulted in the loss of native plant and animals that depend on wetland habitats. In addition, purple loosestrife limits the growth of rare plants and can clog drainage ways and ditches, negatively affecting adjacent land and crops.

Since purple loosestrife grows in wetlands, methods to control this plant and promote native biodiversity aren’t always easy. Small young infestations can be removed using hand tools, but care must be taken to dig out all of the root portions to avoid regrowth. This may not be feasible for larger, more established infestations. The flower heads cut be cut, bagged and disposed of to prevent seed production and the spread of this plant. Chemical herbicides can be utilized by licensed applicators that follow strict protocols to avoid contaminating water bodies and non-target native species. However, there is an easier way to fight this invasive: biological control or biocontrol. Biocontrol is the control of an invasive species by introducing a natural predator of that species following very specific federal and state regulations and testing to make sure there will be no other negative impacts on the ecosystem. In this case, the biocontrol is the small purple loosestrife beetle, a beetle of the genus Galerucella. These are native to Europe and Asia and feed on purple loosestrife in its native range, keeping the plant in check.

Scientists must thoroughly test any biocontrol species to make sure they only affect the target invasive species and don’t negatively impact native species. In the U.S., studies have shown the beetles to be very host-specific, feeding and reproducing predominately on purple loosestrife. The beetles do not completely eradicate purple loosestrife, but they suppress the plants’ growth and ability to reproduce by feeding on its stems, buds and leaves. Thus, they reduce the plants’ dominance and impact within the ecosystem.  Since 1992, biologists working under state and federal permits have released millions of these beetles at numerous sites across the northeast, including at several New York State Parks, such as Silver Lake State Park in western NY.  In NY, the Department of Environmental Conservation continues to monitor the numbers and effectiveness of the beetles and to ensure there are no unforeseen problems.

The beetles are released in the summer when loosestrife is actively growing. They overwinter in the soil near the host plants and emerge in the spring to reproduce, with females laying eggs from May to June. When they hatch, the larvae feed on the loosestrife’s young growth and work their way down the plant where they eventually enter the soil to pupate. They emerge as adults in the summer and the cycle continues. Though they are not strong fliers, occasionally the beetles have been found 10-12 miles away from the initial release site. 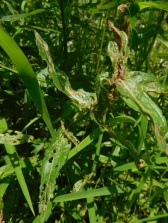 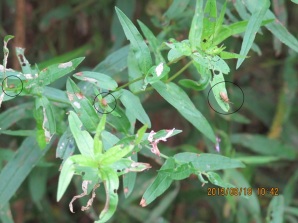 The extent of purple loosestrife has declined dramatically in areas with this biocontrol. It is unlikely that the beetles will eliminate purple loosestrife populations entirely. The hope is that as more Galerucella beetles are released across the state, the invasive loosestrife will be diminished, making room once again for the native flora and fauna at these sites.