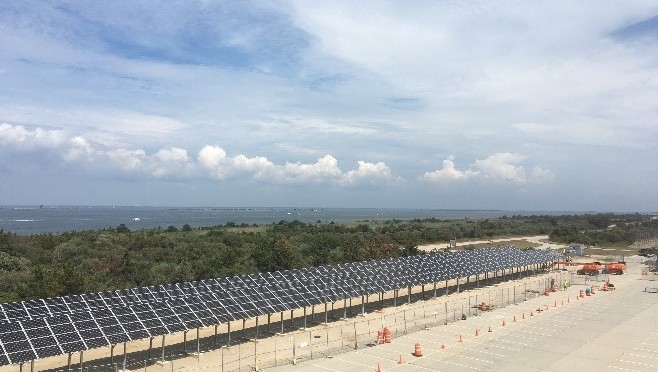 While there aren’t public events in State Parks this week to mark the 50th anniversary of Earth Day on Wednesday, some of our facilities are still helping the planet every day in the fight against man-made climate change.

Each year, Parks use more than 50 million kilowatt hours (kWh) of electricity to power some 5,000 buildings, including offices, comfort stations, maintenance barns, nature and visitor centers, cabins, historic sites, and other unique facilities like golf courses and pools.

To feed more renewable power into the grid and reduce its demand for fossil fuel-fired electricity, Parks has been installing photovoltaic (PV) solar arrays since 2012. There are now 32 arrays in place, with more expected this year in the Hudson Valley and Long Island regions.

Once the new arrays are completed this year, State Parks will be covering 15 percent of its total statewide energy consumption through solar power, up from the current 4 percent.

These new arrays will offset all the power demand in the Park’s Taconic Region on the eastern side of the Hudson River, which includes 14 parks and eight historic sites in Columbia, Dutchess, Putnam and Westchester counties.

Adding solar power – which unlike natural gas or other fossil fuels does not produce the greenhouse gases that are driving man-made climate change – also saves Parks money on its utility bills. Each year, solar arrays are trimming nearly $340,000 from what Parks would otherwise pay for its electricity!

To perform this work, which both fights climate change and saves money, Parks have trained 100 staff members to design and install our solar arrays.

Parks selects locations for PV arrays that will not disturb natural areas of the park or areas of recreation. They are often installed on rooftops, the back of parking lots, or in other areas that have previously been disturbed.

Parks also applies for financial rebates from the New York State Energy Research and Development Authority (NYERDA) to lower the cost of each project, with savings then reinvested to fund future PV projects. Parks also coordinates with private utility companies to connect its arrays to the grid.

Due to such efforts, three Parks are now electric-energy neutral facilities, and produce enough power for the grid to cover what the consume: Robert Moses State Park, Captree State Park (both on Long Island) and Allan H. Treman State Marine Park in Ithaca in the Finger Lakes. Additionally, Parks has an off-grid PV facility that provides power directly to Bennington Battlefield State Historic Site.

Completed in 2017, Robert Moses State Park made history as being the largest PV installation built by state employees _ its 2,432 American-made panels cover the length of two football fields! This array generates about 950,000 kWh annually, saving more than $100,000 in electricity bills. (For comparison’s sake, the average household in New York State uses about 8,000 kWh annually, according to the U.S. Energy Information Administration).

Parks also funded, developed, built and managed the first PV installation on the roof of a building listed on the National Historic Register at Peebles Island State Park, headquarters of the Bureau of Historic Sites and Bureau of Historic Preservation Field Service.

The 450 panels installed on the roof of Peebles’ historic Bleachery Building are projected to generate more than 188,000 kWh and save about $22,500 in utility bills annually. The array covers approximately 30 percent of the building’s energy use. The array at Peebles Island is also used a training location for students from  Hudson Valley Community College and the Glenmont Job Corps.

And there will be much more to come. State Parks intends to aggressively increase its solar footprint in order to cover half of its statewide electrical consumption by 2025.

From our smallest arrays to our largest arrays, each PV installation is working to create a greener state parks system every day and for many Earth Days to come!

One thought on “Solar Power Keeps Growing in State Parks”