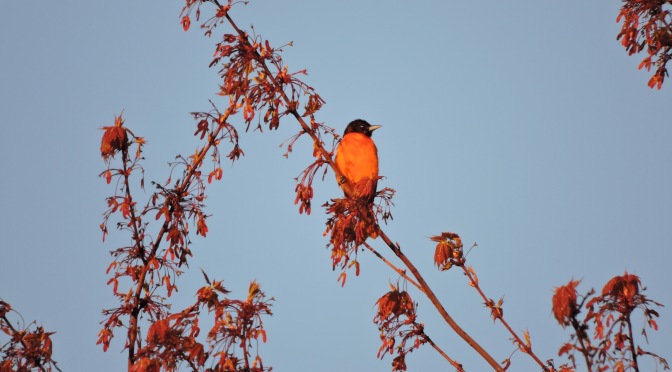 Planning for a New York State Parks birding “big day” started before the COVID-19 pandemic changed our world and lives. Originally, it called for a team of three to four birders to see how many species could be tallied in one day while visiting only State Parks during the height of spring migration in May.

Besides being a fun adventure, I wanted to highlight the fabulous birding opportunities for visitors to the State Parks in Western New York, and bring attention to habitat restoration projects in several parks that have enhanced the birding in the parks. The third week of May is the best time to see the most bird species in Western New York and it was perfect that my kids and wife were scheduled to be away for a trip to Boston.

While the school trip and the team approach didn’t work out due to COVID, my original target date of May 20th held up and I embarked on a solo, New York State Parks only, birding big day. Of course, this was done while wearing a mask and maintaining social distance from other Parks visitors as spelled out in these guidelines.

And the day started early…

Many bird species started singing as sunrise approached and then after sunrise, I quickly realized that it was going to be a great day because there were warblers and other migrant birds all throughout the park.

I departed Golden Hill around 8:45 a.m. with 93 species, including 22 warbler species. I also realized that luck was working in my favor, as evidenced by one notable example. While scanning Lake Ontario with my spotting scope, I heard a Cerulean Warbler sing from some trees behind me. I turned away from the lake to go find this rare migrant and watched a pair of Sandhill Cranes fly by as I walked. Had I not turned when the warbler sang, I would have missed the cranes!

* Wilson-Tuscarora State Park, Four Mile Creek State Park, and Fort Niagara State Park, Niagara County, through 1 p.m.  The lakeshore parks were all filled with migrant birds and it was tough to leave them even though I was well behind schedule at this point. With 109 species already, it was time to head south along the Niagara River for some species I had “staked out” in the weeks beforehand.

* 1:10 p.m. Joseph Davis State Park, Niagara County. Not only was the Pied-billed Grebe still present as I was hoping, but I found another sitting on a nest. After some quick photos to document the breeding activity of this State-listed threatened species for the New York Breeding Bird Atlas III project, I hiked the trails to find a few other likely breeding species that were present a week earlier. It’s rewarding to see that the vegetative habitat in the eastern part of the park is still in good shape after an invasive species removal and bird habitat restoration project was completed in 2013. I was involved in that project design through my employer Ecology and Environment Inc (E&E)., a WSP company, as part of grant funded project with Buffalo Audubon Society and Audubon New York.

*2 p.m. Artpark State Park, Niagara County. Even among local birders, not too many people think of Artpark as a birding destination; however, an upland grassland habitat was created on the Lewiston Plateau as part of a 2003 project involving E&E and the Village of Lewiston with funding from the NYS Environmental Protection Fund and Niagara County. This grassland has hosted Grasshopper Sparrows for years, and this year I discovered rare Clay-colored Sparrows there as well.

While I expected to get these two “staked out” species, I also picked up two nice bonus species with Black Vulture and Merlin, both seen flying from the expansive view looking toward the Niagara Gorge. My list was up to 120 species.

* 2:45 to 4 p.m., Reservoir State Park and Niagara Falls State Park, Niagara County. A quick check of the Lewiston Reservoir provided an Osprey but not any hoped-for shorebird species. While Niagara Falls State Park is one of my favorite local places to go birding, I didn’t spend a lot of time there beyond picking up a few expected species in the afternoon on this warm day. Falling more behind schedule, I had to drop one of the planned stops and reluctantly passed by Buckhorn Island State Park, which is a great place to go birding. However, I felt that I had better chances of adding new species at other parks with less hiking time. I likely missed out on a few species there.

* 4:15 p.m. Beaver Island State Park, Erie County. This spring, the local birders have regularly visited the recently restored marsh habitat along the Niagara River in East River Marsh. Marsh birds have really taken to this location and I added a handful of species including Sora and Marsh Wren to my list. It’s been delightful to see such a rapid response from birds to this restored habitat. New York State Parks took on the design and construction project efforts with funding through the Great Lakes Restoration Initiative. This serves as a great predecessor to some upcoming similar projects at Buckhorn Island State Park.

*5:50 p.m. Amherst State Park, Erie County. This is the park where the warmest day of the spring caught up with me through more than fatigue. I’m a regular visitor to the park in spring and fall for birding and family hikes but I’m always there in the early morning. I had never seen so many people in the park as on this visit and I knew right away that birding would be a challenge, as well as trying to maintain social distancing even though most in the park did not share that concern. I picked up two staked out species plus an obliging White-breasted Nuthatch, a common species that I was in danger of missing out on for the day.

*6:50 p.m. Woodlawn Beach State Park, Erie County. A walk on the beach on a beautiful evening with the sun starting to set over Lake Erie was picturesque but without any new shorebird or gull species that I was hoping to add. A Cooper’s Hawk seen from the parking lot kept up the streak of adding at least one new species at each park on the day.

*8 p.m. Knox Farm State Park, Erie County. The last stop was good to get Eastern Meadowlark and American Kestrel in the extensive grasslands and then the last addition for the day was a Wood Duck that I saw fly into the woods. With sunset nearly on hand, I called it a day and headed home.

And what a birding adventure it was. The final count was 138 species, which was much better than I was expecting. Other notable numbers were 185 miles by car, over 30,000 steps on foot, and 11 State Parks visited.

While I have known of the tremendous birding in these parks for many years, it was great to get out and experience so many of them in one big day. It only reinforced to me how important these parks are for providing bird habitat, and how habitat restoration projects I’ve been involved with professionally have improved bird habitat even more at several of the parks.

Birding has been one of the best ways for me and many others to get outside during these pandemic times. A big day is at the more extreme end of the birding hobby, and not the way for someone to start into birding. Visiting your local State Park is a great place to go and start out.  For the more experienced birders, the bar has been set at 138 species for a New York State Parks (only!) big day. I’ll be interested to read about the efforts of others who try a similar adventure.