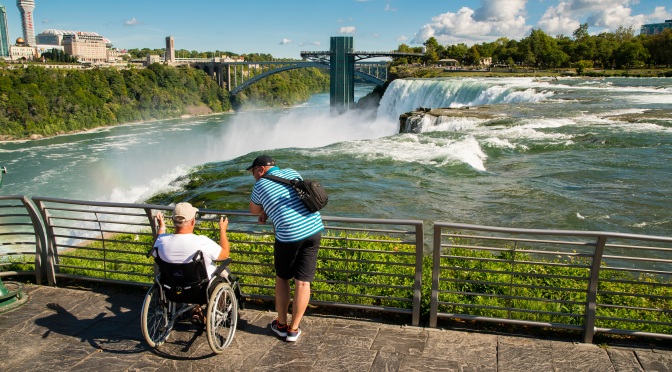 Did you know that Niagara Falls State Park is the oldest state park in the United States? Established in 1885 as Niagara Reservation, the breath-taking waterfalls at this park are considered some of America’s greatest natural wonders. Did you also know that the American Falls at Niagara Falls State Park, at around 100 feet tall, is not the tallest waterfall in New York? To find this peak waterfall, we must actually go to another New York State Park! From high plunges to rocky cascades, waterfalls are all over New York State Parks. In fact, there are 15 parks that have sizeable waterfalls. Few can deny the mesmerizing power and beauty of a waterfall, so why not try to add some of these destinations to a road trip this summer?

Easily the most well-known of New York’s waterfalls, Niagara Falls is actually composed of three distinct waterfalls. The smallest is Bridal Veil Falls (the middle falls in the picture), which measures around 50 feet wide and 80 feet down to the rocky cascade below. Luna Island separates Bridal Veil Falls from the American Falls, both of which are on the American side of the Niagara River. American Falls (located on the far left of the picture) is around 100 feet tall (measured from the top to the rocky piles below) and around 830 feet wide. Horseshoe Falls (on the right in the picture), which runs between New York and Canada, averages 188 feet tall and 2,200 feet wide.

Considered the “Grand Canyon of the East,” Letchworth State Park southwest of Rochester has three major cascading waterfalls – Upper, Middle, and Lower Falls – which range from 70 to 100 feet tall. There are also numerous smaller waterfalls as the Genesee River cuts through the gorge.

Stony Brook State Park, near Dansville, contains a large, rocky gorge common in the Finger Lakes. Visitors can hike along the Gorge Trail to see two of Stony Brooks’ three main waterfalls, as well as several smaller ones in between. Lower Falls, the largest of the three, cascades about 40 feet down to Stony Brook below.

Buttermilk Falls State Park, near Ithaca in the Finger Lakes, contains a large cascading waterfall, 165 ft, right near the entrance to the park. If you hike up the Gorge Trail, you will find several other minor falls along Buttermilk Creek. There is even a natural swimming area at the base of these falls.

At Watkins Glen State Park, located at the southern tip of Seneca Lake in the Finger Lakes, you can walk through the gorge along the scenic Glen Creek. Within the two-mile glen there are 19 waterfalls that you are able to walk past, two of which you can even walk behind! Central Cascade is the park’s largest waterfall, plunging more than 60 feet.

Home to ten smaller and two major waterfalls, Robert H. Treman State Park is located in Ithaca in the Finger Lakes. In the Upper Gorge you can hike to Lucifer Falls, a 115-foot cascading waterfall. Another park highlight is the stream-fed pool right at the base of the cascading Lower Falls.

Taughannock Falls State Park, located in the Finger Lakes north of Ithaca, is home to the highest vertical single-drop waterfall in the eastern United States. Carved into 400-foot cliffs, water from Taughannock Creek plunges 215 feet over Taughannock Falls. Two smaller waterfalls, Upper and Lower Falls, can also be found at this park.

Another classic gorge of the Finger Lakes, Fillmore Glen State Park (about 20 miles northeast of Ithaca) is home to five waterfalls. These range from 5 feet in height to the largest in the park, Dalibarda Falls, which is around 85 feet tall. Dry Creek, which runs the length of the park, helps create a stream-fed swimming pool in the Lower Park area.

Chittenango Falls, a beautiful 167-foot staircase cascade, is the highlight of Chittenango Falls State Park, located in Central New York southeast of Syracuse. Enjoy the view from the picnic area above or from a wooden bridge over Chittenango Creek below. Chittenango Falls is also home to the world’s only population of the federally threatened Chittenango ovate amber snail!

Pixley Falls State Park is named after its main attraction, the 50-foot waterfall on the Lansing Kill. There are also a few smaller falls in nearby streams. This park is in Central New York, about 20 miles north of Utica.

Located southwest of Albany, Mine Kill State Park features an 80-foot cascading waterfall that cuts through a narrow gorge. Hike down to the base or check out the separate parking area (1/4 mile south of the park’s main entrance) that provides access to the overlook viewing platform.

John Boyd Thacher State Park, just west of Albany, contains numerous waterfalls which range from 5 feet to over 100 feet. Indian Ladder Falls (also called Minelot Falls) and Outlet Falls are two of the larger falls at this park, each plunging around 100 feet.

Peebles Island State Park is just north of Albany, located at the merging of the Mohawk River into the Hudson River. There is a waterfall here, about 15 feet high, in the Mohawk River near the southern end of the park.

Taconic State Park shares borders with Massachusetts and Connecticut. Many people flock to this park to see Bash Bish Falls, which is actually just a short hike across the New York border into Massachusetts. After a long cascade and a 60-foot drop, it is Massachusetts’ tallest single-drop waterfall.

Minnewaska State Park Preserve, located in the Hudson Valley near New Paltz, contains many waterfalls. Near the gate house, the Peters Kill plunges around 70 feet at Awosting Falls. Stony Kill is another plunging waterfall, reaching about 90 feet in height. Some other well-known falls include Rainbow Falls, Bogerman Falls, Peterskill Falls, Sheldon Falls, and Verkeerderkill Falls near the Sam’s Point Preserve area.

Please remember that waterfall conditions are dynamic, changing with weather and seasons. Stay on the trail and be cautious of your surroundings, like slippery or rocky terrain, fast moving water, or steep drops.

For more information, check out some of these great waterfall resources: