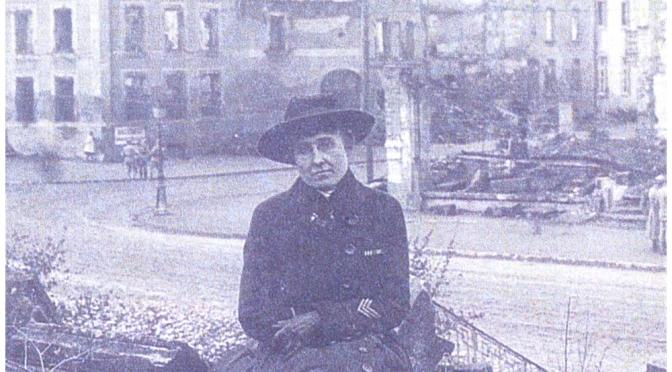 As the Revolutionary War was drawing to an end, General George Washington wanted an award that recognized merit in the common soldier. So, he created the Badge of Military Merit _ the precursor to the Purple Heart _ while at his Newburgh headquarters in the Hudson Valley.

It was more than 150 years later when a New York resident and immigrant became the first woman to receive the Purple Heart for suffering wounds in wartime. And she was a nurse, a profession that has again finds itself at risk in the front lines during the current COVID-19 pandemic.

One night in August 1917 during World War I, a German aerial bomb exploded at a military field hospital in Belgium. It was about four miles behind trenches where hundreds of thousands of British, French, Belgian and German troops were fighting the Third Battle of Ypres, also known as Passchendaele.

Metal shrapnel ripped through a tent at Casualty Clearing Station #61, where 36-year-old U.S. Army nurse Beatrice Mary MacDonald was rising from her cot to start her shift caring for wounded Allied soldiers. Jagged shards struck her face, damaging her right eye so badly that it later had to removed by doctors.

Although serving in the U.S. Army Nurse Corps, MacDonald was a native of Canada, where she grew up in a large family on Prince Edward Island. She had come to New York to get her nursing training in 1905 and chose to live there afterward to pursue her career. When war came, she volunteered for the American war effort. She was part of a unit organized by Presbyterian Hospital, now part of New York-Presbyterian Hospital.

After a six-week recovery from her injury, Macdonald returned to duty serving in military hospitals in France and Belgium. “I’ve only started doing my bit,” she said, according to material from her wartime scrapbook, which is now in the collection of the Radcliffe Institute for Advanced Study at Harvard University.

In her scrapbook, the young nurse described her training to deal with one of the horrors of the battlefield _ poison gas. That included “. . . entering chambers containing a certain amount of Phosgene and other gasses, in order that we should be able to recognize them in case of an attack, and to become adept in adjusting our gas masks in less than ten seconds.”

She kept photographs of the tent where gas casualties were treated, including a shot of one area that was set aside for “hopeless cases.”

After the war ended in 1918, MacDonald served with Allied forces in Germany until returning to the U.S. There, she resumed living in New York City to continue her profession, and later served as director of the Pennsylvania Hospital School of Nursing for 23 years until her retirement in 1956.

The war had been over for years when MacDonald received her Purple Heart in 1936, four years after the award has been reestablished under an order by President Herbert Hoover. The modern award was meant as a tribute to Washington’s original award, which he represented with a cloth or silk purple heart.

In authorizing the Purple Heart, the award was made retroactive to living World War I veterans like MacDonald, who was among thousands of male soldiers who subsequently applied for and received the award.

MacDonald received numerous awards in recognition of her bravery and is perhaps one of the most highly decorated women of World War I. Her commendation for the Distinguished Service Cross states:

“It is interesting to note that this cross is to be conferred upon a woman and a nurse. This war has, of course, taken the nurses, who are the ministers of mercy, up to the very front lines of battle, and because of the carrying of the war into the third dimension the airplane has, of course, made their task more perilous.”

MacDonald is one of many stories found at the National Purple Heart Hall of Honor in New Windsor, Orange County.  Opened in 2006, it is the first facility in the nation dedicated to the estimated 1.8 million recipients of the Purple Heart, which is awarded to American military personnel who have been wounded or killed by enemy action.

Currently, the facility is temporarily closed as it undergoes a $17 million expansion to add nearly 4,300 square feet of new and refurbished exhibit space, with an increased emphasis on stories of individual award recipients.

The expansion project will incorporate integrated audio-visual and media presentations, as well as museum-quality casework for each area with interpretive graphics, locally controlled lighting, touch-screen interactive monitors, and multiple large-format graphic displays. Once completed, the Hall will feature new exhibits that tell stories about joining the service, the day of the incident, field treatment and evacuation, the changing nature of warfare, the consequences of war, road to recovery and the ultimate sacrifice. The expanded exhibits will include more personal stories, interactive displays, and artifacts that highlight the experiences of featured Purple Heart recipients.

Cover Photo- U.S. Army Nurse Beatrice Mary MacDonald in the ruins of a French town. All photographs from NYS Parks unless otherwise noted.

COMMON MISPERCEPTIONS ABOUT THE PURPLE HEART

General Washington created the award called Badge of Military Merit in 1782. It was a heart shaped piece of cloth or silk. It was to be awarded for a “singularly meritorious act”. It all but disappeared after the American Revolution. It was never referred to as the “Purple Heart” in Washington’s time. That language was used in General Order #3, establishing the Purple Heart award in 1932.

Only those casualties resulting from enemy action are eligible for the Purple Heart. “Non-hostile” injuries or deaths (e.g. disease or accidents)  are not eligible. The injury must require medical attention, be treated by a medical professional and documented. Numerous instances have occurred where the award was not made due to clerical errors, confusion after a battle or lack of proper documentation.

If you are wounded you automatically get a Purple Heart: FALSE

If the wounding was caused by the enemy, required professional medical attention and was documented, then the individual is eligible and should receive the award. However, there is a “paperwork process” that must be completed. Also, from 1932-1942 the majority of recipients had to apply for their awards as they were WWI (and earlier wars) wounded veterans, and therefore no longer in the military.

While General MacArthur did sign General Order number 3 creating the modern Purple Heart on 22 February 1932, he did not apply for his Purple Heart until July 1932. By that time many WWI wounded veterans had applied for and received their awards (including the 136 veterans at the Temple Hill Ceremony held on the Grounds of what is now the Hall of Honor, 28 May 1932). General MacArthur’s medal however, was numbered “1”

The Government has a list of all Purple Heart recipients: FALSE

There is no list of Purple Heart recipients maintained by the Federal Government. The information is found on the record of the individual, or in copies of General Orders. This information has never been extracted to generate a list of all recipients.

Those wounded or killed in all wars are eligible for the Purple Heart: FALSE

When the award was created in 1932, it was open to any living veteran who felt that he or she was qualified. This resulted in a small number of recipients from the American Civil War and Spanish-American War. However, current regulations limit the award to those killed or wounded after 5 April 1917.

You have to be in combat to receive a Purple Heart: FALSE

The term “enemy action” has a much wider application than traditional combat. Changes in the regulations now recognize: injury or death while a prisoner of war; certain instances of friendly fire; as well as considering international and specific types of domestic terrorist acts.

Lt. Annie G. Fox was the first women to be awarded the Purple Heart: FALSE

The first 136 Purple Hearts were awarded May 28, 1932 at Temple Hill, now the site for the National Purple Heart Hall of Honor: FALSE