Southern pine beetle has killed thousands of pine trees since it was first found in New York State in 2014. This bark beetle is native to the southern United States, but arrived in New York after working its way northward for many years. Although the beetles are small (2-4 mm; less than 1/8th inch), they are able to kill trees in 2 to 4 months by attacking in large numbers. Once beneath the bark, the thousands of beetles create S-shaped tunnels as they feed on the inner bark, which soon cuts off the nutrients the tree needs to survive and grow.

S-shaped tunnels created by southern pine beetle are visible in this round “cookie” or slice of wood from beneath the bark of a pitch pine tree. Photo credit: NYS DEC

In New York, pitch pine trees have been attacked by southern pine beetle more than any other species. Pitch pine trees are often a part of unique, globally and statewide rare ecosystems such as Pitch Pine-Scrub Oak Barrens, Pitch pine-oak heath woodlands, Pitch pine-heath barrens, Pitch pine-oak-heath rocky summits, Dwarf pine plains, and Dwarf pine ridges. In New York, southern pine beetle has been found in trees across Long Island and in traps as far north as Minnewaska State Park Preserve in the Shawangunk Ridge. Large forested and unique areas such as the Long Island Central Pine Barrens Preserve and the Shawangunk Ridge are of the highest priority to protect. Maps of the pitch pine communities of statewide significance created by NY Natural Heritage Program provide further guidance on priorities. Although there are no known means to eradicate southern pine beetle, there are measures to reduce the beetles’ impacts and save some of the susceptible pines.

To help fight against southern pine beetle, the NY State Department of Environmental Conservation’s (DEC) Forest Health team has conducted trapping, aerial surveys, and ground surveys to monitor for the beetle and cut infested trees (suppression) to manage the beetle. Currently, suppression efforts are focused in the Central Pine Barrens of Long Island. In some cases, pines are replanted along trails or in areas where impacts have been high. The beetles do not attack small, young trees, so the hope is that some trees will survive and produce seed to maintain pine in these ecosystems. 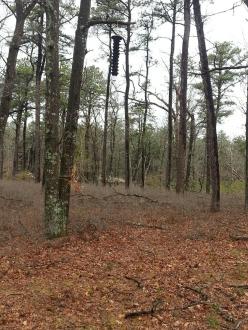 A southern pine beetle trap hanging from a tree in pitch pine community. The traps are used to detect if beetles are in an area. Photo credit: Tom Schmeelk, NYS DEC 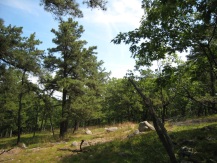 Southern pine beetle is expected to work its way up the Hudson River corridor. The pitch pine-oak-heath rocky summit community occurs scattered along the eastern NY ridges from the Hudson Valley to the Thousand Islands. DEC monitors sites across the region so that teams can act quickly to contain SPB outbreaks and slow the spread. Photo credit: J. Lundgren, NYNHP

In areas that the beetles were captured in traps, but were not found in trees, such as at Bear Mountain and Minnewaska State Parks, the focus continues to be on early detection and surveying for infested trees. DEC conducts aerial surveys over Bear Mountain and Minnewaska State Parks to map out areas potentially infested with the beetle. These aerial surveys are quickly followed up by ground surveys by DEC, State Parks, NYNJ Trail Conference, and others to verify if the trees are infested. So far, no ground surveys have found infested trees in either of these parks.

Efforts at Connetquot River State Park Preserve on Long Island, one of the hardest-hit areas, are focused on removal of dead trees. State Parks, with help from the Excelsior Conservation Corps (an AmeriCorps program) has been cutting down dead trees killed by southern pine beetle along trails to keep the trails safe and open to visitors. State Parks is also chipping up some of these dead trees to help speed up decomposition.

On the trunk of infested trees, the main symptom of southern pine beetle attack is an abundance of pitch tubes which are usually about the same size and color of popcorn. Photo credit: NYS DEC

DEC, Parks and Trails New York, and State Parks co-sponsored tree planting as part of I Love My Park Day in Connetquot River State Park Preserve on May 7th, 2016. DEC’s Tree for Tributaries trained volunteers to plant the 600 pitch pine that were donated from New York State’s Saratoga Tree Nursery. The pitch pine trees were raised from seed originating from Long Island and will help maintain the local pitch pine genetics that is adapted to the conditions of Long Island. Through hazard tree mitigation, chipping, suppression, and re-planting pine trees in areas attacked by southern pine beetle such as Connetquot, hopes are that forests will remain safe for public use and maintain their pitch pine components in the wake of southern pine beetle.

For more information on pitch pine communities see the NYNHP Conservation Guides.  A few of these types are listed below:

For other pitch pine community types or to see what occurs in your county, go to guide.nynhp.org and type “pitch pine” into the advanced search box and check off the community category box.