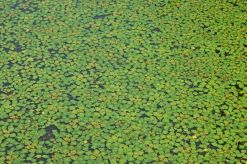 Water chestnut (Trapa natans) is a submerged rooted plant that can densely cover shallow areas. This not only deprives the water from dissolved oxygen and other essential nutrients, but can also get tangled in boats, swimmers, and fishing line. On an economic stand point, aquatic invasive species like water chestnut, if not treated, can lower shoreline property values. Photo by: By Krzysztof Ziarnek, Kenraiz (Own work) [CC BY-SA 3.0 (http://creativecommons.org/licenses/by-sa/3.0)%5D, via Wikimedia Commons

Japanese knotweed (Fallopia japonica) forms a dense cover that can crowd out native vegetation. This species can greatly affect the biodiversity in habitats. Photo by: By H. Zell (Own work) [GFDL (http://www.gnu.org/copyleft/fdl.html) or CC BY-SA 3.0 (http://creativecommons.org/licenses/by-sa/3.0)%5D, via Wikimedia Commons

Invasive species come from near and far and affect all types of habitats found throughout New York State. Since many of our commercial, agricultural, and recreational activities are dependent on a healthy native ecosystem the presence of invasive species can impact all people and the natural world. Aquatic invasive species such as hydrilla (Hydrilla verticillata), water chestnut (Trapa natans) or zebra mussels (Dreissena polymorpha) have inhabited many of New York’s water ways. On land, species such as Japanese knotweed (Fallopia japonica), can overcrowd native environments.

How you can help!

Boaters/Anglers Wash and dry your boat properly. Be sure to remove all plant matter from boat, ballast, prop, trailer and all equipment. Dispose debris correctly. Use aquatic invasive species disposal station if available.

Gardeners Plant only native plants. Educate yourself and others about the importance of using native species. There are many native look-alikes that are just as beautiful.

Whether you are a boater, fisherman, hiker, gardener or simply a concerned citizen, it is important to educate yourself and others on the different species found in your home state. You can make a difference in stopping the spread of invasives! Here you can find information on invasive species found in the State of New York.

Many State Parks have events during New York Invasive Species Awareness Week to involve the public in preventing the spread of invasive species.