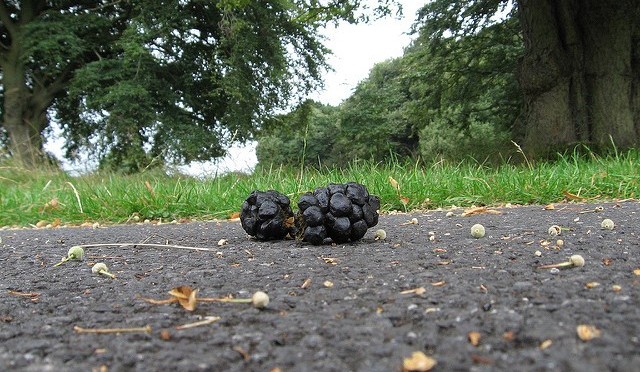 It’s the most wonderful time of the year, the snow is falling, the air is crisp, and the hiking opportunities in State Parks abound. While marveling at the snow-encrusted majesty of the pine and hardwood branches, don’t forget to look down and take a peek at one of the less glamorous and stately aspects of a wintertime hike – wildlife scat! Analyzing who’s who with number two might be the number one way to figure out who is visiting the trails with you, as well as how long ago they were there.

Hunters have long used scat to help with the hunt, determining if animals were around and when, following the scat clues to their quarry. Wildlife watchers and photographers have also used this tool to seek out wildlife. What you can learn from scat can be interesting to anyone, no matter if your intent is to hike, hunt, or just unwind in nature.

Is the scat frozen? The animal could have been around last night. Is the scat desiccated, or dried out and old looking? It could be scat from last season. Can you see if the scat melted snow around it? The animal might not be far away. Are there more than a couple of piles of scat? There could be more than one animal around. Does the scat contain fur? There may be predators hunting.  Scat can be an amazing addition to your toolbox to determine presence and habit of a variety of wildlife around. Here are some photos of common scat piles to help you infer who your wild neighbors are in the woods.

Deer scat might be the most common scat to be found on the trail. Deer scat is usually in pellets and in a pile. If the pile is under leaf litter, or a layer of snow, it is most likely old (see below photo). Deer scat can also be in a more “wet” or “patty” form, but pellets are usually still distinguishable. Shiny or wet scat can indicate a deer is close by!  Deer produce pellets about 13 times a day, a product of their near constant grazing. Bigger bucks can leave bigger poo piles than the does. You can also look further into the scat signs, and see what the deer are preferring to eat. Hunters often organize a hunt around the transition corridors of feeding and bedding areas. Lots of scat in a certain type of feeding area (i.e. clover, grass, apples) would indicate that deer may be accessing this area daily to eat.  Deer beds and poo in cover areas, like scrubby emergent forest, would indicate deer access that area to sleep. A hunt that is set up between those areas, where the deer are apt to travel every day, might have the most chance of being successful.

Rabbit scat is also very common in brushy areas, and is usually round. Rabbit scat is generally smaller than deer scat and can be more spread out in the feeding area. Look for rabbit scat near low bushes or other available cover. In a strange evolutionary twist, rabbits also produce a second type of scat, called cecotropes, that they eat shortly after depositing. These powerful pellets are full of beneficial gut bacteria.

Porcupine scat can contain woody fiber, as they eat twigs and bark. Scat may also be at the entrance to their dens; they don’t seem to need to keep a clean house. Dens can sometimes have mounds of scat around them, if used over multiple seasons. It is theorized that porcupines’ scat piles could provide some warmth in the winter.  Porcupine scat can resemble deer scat, but is somewhat cashew-shaped, as opposed to the rounder deer pellets.

Foxes, and others in the canid family, like to make a point to be sure you see their scat. They often lay their brick and mortar on top of a rock or something high to mark their territory. Fox scat does not smell as foul as your house pet’s deposits; however it does have a distinct musky odor. Fox scat usually contains hair and is very dark with distinct twisted ends, unlike house dog scats, which are tubular with blunt ends.

If you are lucky, you might see bear scat on your next hike! Bear scat is usually characterized as a “plop” instead of pellets. Bear scat can be in enormous piles and can be a variety of colors and consistency depending on their last meal. Bears are omnivores, and so can have nuts, hair, or berries visible in their scat. Bears can also be attracted to food caches in town, like bird feeders, before the long snooze in the winter (see photo below). Bear scat also does not smell as strongly as other scat, and in times where they have a vegetarian diet, can smell quite pleasant (for poo).

Another very common scat is that of the turkey. Turkey scat, like other birds, contains both urine and feces. The white part of a bird’s scat is the urine.  You can actually tell a male gobbler from a female hen by the shape of the scat. Male turkeys generally balance the budget in a J shape, while females are more in a pile, with a slight spiral to it.  This is because of the anatomy of a female turkey, which has a wider cloaca for eggs to pass through.

Another elusive animal you may see by scat rather than seeing in the fur, is the mink. A small furbearer, like the weasel, a mink’s scat is tiny, braided and pointed, with a twisted end. Mink also like to advertise their bathroom breaks on top of logs or stones, like foxes and coyotes. You can tell the difference between mink and weasels easily in the winter, as mink do not change their fur coats out for the camouflage that weasels do. Weasels should be white this time of year.

Another avian visitor common to parks is the Canada goose, as well as the snow goose. Both geese, like turkeys, have a distinct white cap on their scat. Goose poop however is more of a long log, and usually found around beaches and other waterbodies in the parks. Geese are normally pretty comfortable around people, and buildings, so you are more likely to see goose scat on the lawns and beaches rather than in the woods on trails.

Our final foray into the wonderful world of waste is with one of the largest visitors to the Parks. Moose are more common in the Adirondacks, but have also been seen in the Taconic Highlands.  Moose scat can look like supercharged deer scat. Pelletized, and in piles, moose scat most closely resembles deer scat winter. In the summer months when their diet is more wet, moose scat may resemble cow patties. It can also trick people into thinking it is bear scat. To determine the origin, check out the mode of digestion. Moose are ruminants.  Like cows, they have four compartments in their stomach, so four times the digestion efficiency, and so usually poop fully digested food. Their scat is generally uniformly composed.  Bears are omnivores, with one stomach, and their scat can be more variable in composition, often with undigested berries and hair.

Winter hikes are some of the most fun and most unique hiking in NYS Parks, and most Parks do not charge entrance fees in the colder months. Come prepared with extra winter clothing, first aid packs, and always let someone know your plan in case of emergencies. And don’t forget that the feces of many species can be an informative and fun addition to your knowledge of wildlife and outdoors.