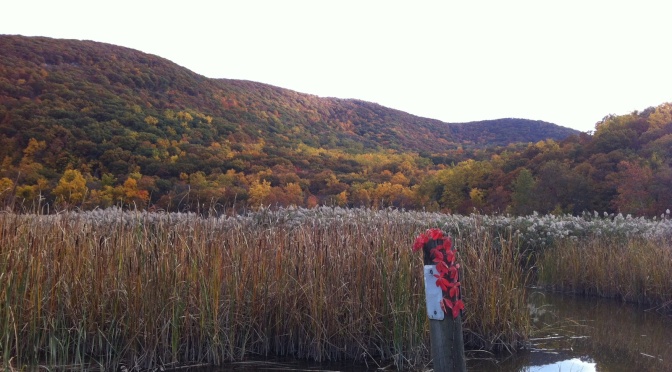 Iona Island, located along an elbow of the Hudson River in Bear Mountain State Park, is technically an archipelago of three islands connected by marshlands. Iona has had many owners in its storied history, prior to being bought by New York State in the 1960s. The Island was host to Native American tribes for thousands of years, who took advantage of the plentiful shellfish along its shores. In the last few hundred years, it has been the site of an unsuccessful vineyard, a hotel and weekend destination for NYC residents, a U.S. Navy arsenal, and a partially built park recreation area. The eastern side of the island past the railroad tracks has been closed to the public since the 1980s, but a small portion of the island consisting of the five remaining Navy buildings is used for storage for the Palisades Interstate Park system. The rest of the island has returned to a more natural state of woods, meadows, and rocky outcroppings and serves as a sanctuary for wintering bald eagles.  The island achieved National Natural Landmark status in 1974, and was designated a NYS Bird Conservation Area and Audubon Important Bird Area shortly thereafter.

A key natural feature at Iona is the extensive marshlands, 153 acres in all, flanking its western side.  Part of the Hudson River National Estuarine Research Reserve (HRNERR), this brackish tidal marsh (marshes with water that has different concentrations of salt depending on the tides) teams with life including fish, waterfowl, waterbirds, plants, and crustaceans. In recent times, the rich biodiversity of the marsh, including a number of state rare species, has been threatened by Phragmites australis, or as it is more widely known, common reed.

Common reed (Phragmites australis) is a plant that was likely brought to the US from Europe and Asia in the 1800s through ship ballast or the water taken in by ships to allow them to balance on long voyages. Commonly referred to as just Phragmites, this non-native plant is invasive in the U.S., displacing and crowding out native plant species, such as cattails, rushes, asters, and many others. In turn, the presence of this species has undermined the complex web of marsh dependent organisms.

The non-native Phragmites is identifiable by its tall stature, dark blue-green leaves, and tendency to form dense stands, with little to no possibility for native species to grow in the areas that they occupy. A native species of phragmites (Phragmites americanus) occurs in NY as well, but this smaller plant with reddish stems grows with less density so it does not crowd out other flora.

The phragmites problem at Iona Marsh began in the early 1960s, when the first small colony appeared near a pipe draining into the marsh. Over the next 40 years, phragmites steadily expanded until it covered nearly 80 percent of the marsh area. Researchers tracking these changes noted a concurrent decline in marsh specialist birds and specialized brackish marsh plants, including state rarities.  In an effort to reverse these trends, the Palisades Interstate Park Commission, while partnering with Hudson River National Estuarine Research Reserve and the Highlands Environmental Research Institute, started a New York State Department of Environmental Conservation (NYSDEC) funded management program in 2008 focused on a 10-acre test area. The goal was to reduce the invasive phragmites, and make room for native plants to once again occupy the area. If the program was successful in this small area (1/15th of the marsh), it could be expanded to additional marshlands.

A multi-faceted control and monitoring program has been developed and implemented and the results have been dramatic. More than 90% of the phragmites was eliminated within one year and nearly 97% by the third year. Researchers saw the return of huge meadows of annual native marsh plants, including some state-threatened species, followed by perennial cattail stands. Marsh specialist birds such as Virginia rail, least bittern (State-threatened), and marsh wren followed soon thereafter.  Based on this success, the project was expanded to an adjacent 32-acre area of the marsh known as Ring Meadow. Both areas now have less than five percent Phragmites cover, an overall success on the journey to reestablish native vegetation.

While complete eradication of the Phragmites may be impossible to achieve, success can be maintained through continued monitoring and spot treating remaining and new patches.  Bird and vegetation surveys are conducted annually, as are measurements of sediment build-up on the marsh surface, as it relates to sea level rise.  The goal remains to restore the native plant communities in the marsh to promote biodiversity. A healthy, native marsh community will lead to increased productivity and habitats for fish, birds, and mammals – many of them specially adapted to the brackish conditions at Iona.  With continued management, the long-term outlook is positive for this Hudson River jewel, one of only four large brackish marshes on the Hudson.

Interested in seeing Iona Marsh for yourself? While public canoeing and kayaking are not allowed in the marsh itself to protect this unique place, through collaboration with the State Parks, NYS DEC offers free public canoe programs each summer.  Not a fan of getting on the water? Iona Island is accessible by road. There is a parking lot approximately ½ mile onto the island, right before the railroad tracks (the boundary of the public accessible areas), where you can park and view the marsh. Lucky visitors may spot waterfowl, muskrats, frogs, turtles, wetland birds, deer, or even bald eagles!