The wild turkey is native to North America, but suffered severe declines due to wide-scale forest clearing and over hunting. By the mid-1800’s, this great bird was gone from New York state and much of the northeast. However, in the mid to late 1940’s, some wild turkeys were observed along the NY and PA border from Allegany State Park to the Genesee River Valley, a sign that the habitat might be recovering and able to support them again. So, in the early 1950’s, the New York State Conservation Department (forerunner to the NYS Dept. of Conservation) began a restoration effort in the early 1950s. They started with game farm turkeys, but after a few years, this effort failed because the game farm birds were not wild enough to avoid predation and lacked the capacity to survive.

Meanwhile, a healthy breeding population of wild turkeys expanded from Pennsylvania into the Allegany State Park region of New York. Park managers then gave the Conservation Department permission to trap turkeys in the park, initiating the wild turkey trap and transfer program which began in 1958 and concluded successfully in 1974. This program allowed for more rapid expansion of the turkey population to suitable unoccupied habitats.

The turkeys trapped in Allegany State Park were moved to several areas in the Region and then throughout the state. In addition to the in-state trap and transfer, turkeys from the park were also sent to Connecticut, New Hampshire, New Jersey and Vermont. Other trapping efforts in the region and elsewhere in New York sent birds to Delaware, Minnesota, Rhode Island and the Canadian Province of Ontario. New York turkeys helped re-establish populations throughout the Northeast, Midwest and southeastern Canada.

Nets ready to trap a flock of turkeys.

Turkeys caught in a net. 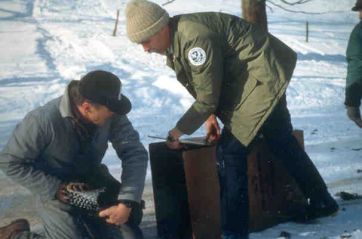 Conservation Department staff and local volunteers place the turkeys into boxes. Afterwards, the birds were moved to their new homes.

New York State Conservation Department was one of the pioneers among state agencies to restore wild turkey populations in the United States. This program would not have been successful without the cooperation of Allegany State Park and to this day is recognized as one of the greatest wildlife management success stories of North America.

4 thoughts on “Did You Know That Allegany State Park Played A Role In Wild Turkey Restoration?”