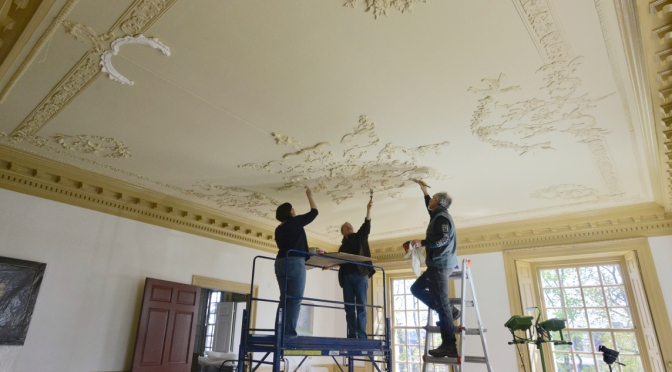 When Alexander Hamilton was married at Schuyler family mansion in Albany, the residence was a pinnacle of style in Colonial America.

Home to one of the region’s richest families, the Georgian-styled mansion was decorated with luxurious wallpaper, rich fabrics, and even an ornamental papier maché ceiling that had been custom made and imported from England around 1760.

This ornate ceiling graced the mansion’s Best Parlor, where Hamilton married Elizabeth Schuyler in December 1780, as the Revolutionary War raged into its fifth year.

To get his decorative ceiling, Philip Schuyler had simply selected designs from a catalog, provided room dimensions with his order and a complete ceiling was shipped ready to install.  Schuyler could have chosen from birds, flowers, shells, moldings, festoons, musical instruments — images that represented his interests and image.

This was not made with the papier maché that people might recall making in school — no newspaper and white glue. This was cotton rag pulp and papier maché that was mixed with water into a oatmeal-like slurry, and then pressed into a variety of hand-carved wooden molds to dry and set.

The resulting super-light and slightly flexible ornaments were inexpensive to ship and easy to install. After a little glue and few tacks to set the ornaments in place, a ceiling was ready for painting.   Once done, it gave a stylish look similar to more expensive plaster ornamentation.

The challenge to the Peebles Island-based Bureau of Historic Site and Park Services, part of the NY State Parks Division for Historic Preservation, was how to recreate something that has not been commercially produced in 150 years.

Making new hand-carved molds was out of the question; it would take too much time and cost too much money.

However, the team at State Parks had an amazing resource — an existing, rare and wonderful example of a mid-18th century papier maché ceiling at the Philipse Manor Hall State Historic Site in Yonkers, Westchester County. This mansion has the only complete surviving example of this type of ceiling in the United States.

However, this ceiling was too significant and too fragile to risk being damaged by the pressure and stress of taking contact from a traditional mold. This is where laser-based, 3D imaging technology came to the rescue.

In a pioneering project, State Parks partnered with Ithaca College’s Physics and Astronomy Department and the Friends of Schuyler Mansion to have the Philipse Manor Hall ceiling 3D scanned by portable laser units that fire pulses of light up to one million times a second. Light is then reflected back to a receiver, which measures how long the light took to return, using the data to create high-resolution scans that captured details down to 100 microns or 4/1,000th of an inch.

“This effort for Schuyler Mansion was a very exciting project to work on … we were using this technology to do something that had never been done before,” said Rogers, who recently became the new chairman of the Physics Department at the University of Colorado at Denver.

It took three visits to Philipse Manor Hall between 2015 and 2017 to get all the scans, he said. With the newest scanner, students could use a hand-held device, wave it around the room and watch the image on the computer as it filled in, “kind of like painting with your hand,” said Rogers.

The scanning of Grant’s Cottage, where Civil War General Ulysses S. Grant spent the final six weeks of his life writing his memoirs, is now being used to help protect the 1870s structure from fire, said Ben Kemp, site manager for the Friends of Grant Cottage. He said the data is being used to help design a modern fire detection and suppression system.

Rogers said this kind of scanning technology also will help in the rebuilding of fire-damaged Notre Dame Cathedral in Paris, which was scanned in 2015.

When the laser scans at Philipse Manor Hall were completed, State Parks had computer images that revealed every paint brush stroke, age crack and tiny detail on the manor’s 250-year-old ceiling, which features images of lute players, bagpipers and singers, as well as busts of Sir Isaac Newton and poet Alexander Pope .

To reproduce this ceiling in Schuyler Mansion, the original idea was to use the scans for a 3D printer to create each unique ornament in plastic. The Bureau of Historic Sites would then use traditional molding and casting methods to make new molds, which would then be used to produce the papier maché ornaments.

But Rogers’ team then figured out how to use the 3D imagery to create computer commands for the State Parks printer to instead make the concave molds used to receive the papier maché .  A total of 55 unique molds were needed to recreate the Philipse Manor ceiling.

These molds were printed in Peebles Island’s Architectural Conservation lab at the Bureau of Historic Sites & Park Services. A printer works using a spool of bioplastic filament, which is heated into a liquid and then fed through a printer head that created the molds layer by layer.

Many molds were too large to fit the printer bed, and so were digitally rendered into smaller pieces and then physically welded together later with a high-temperature 3D pen.

With molds ready, we started making papier maché. Traditional cotton rag papier pulp was pressed  into the molds and the water squeezed out  with large sponges.

More than 300 pieces were cast to make the ceiling, using over 500 pounds of paper pulp. The edges of each casting were hand trimmed. Each piece of ornament was then primed and boxed up for installation.

More than 98 percent of the ceiling was installed by three State Parks staffers in under a week. Hot glue was used to adhere the ornament to the ceiling. The ornament edges were then caulked where necessary and the entire ceiling painted. Once finished, the ornamental ceiling now looks like it has always been there.

Now installed at Philip Schuyler Mansion, this is only the second complete papier maché ceiling in the Unite States.

Over the next few weeks the Parlor also received a crystal chandelier, an imported English loomed carpet and new custom-made drapes. The result is amazing.  For the first time in over a century—the grandeur of the Best Parlor is restored to the time of the Hamilton wedding, from the floor to the ceiling.