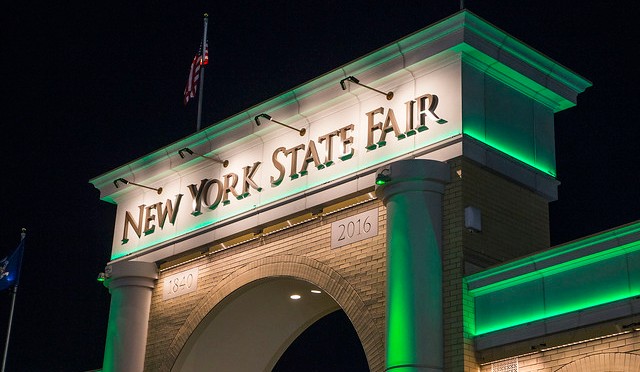 The nation’s oldest State Fair has come a long way since it started in 1841 as a two-day event in Syracuse _ with highlights that included a plowing contest, which was no doubt of interest to an audience that was very familiar with farm life.

Drawing about 15,000 visitors then, the Fair has grown over the decades and last year, set a record with about 1.3 million visitors at the 13-day event.

A $120 million plan by Gov. Andrew Cuomo to revitalize the fairgrounds wrapped up last year, when the 136,000-square-foot Expo Center, the largest indoor events space north of New York City between Boston and Cleveland, was unveiled.

Earlier work at the fairgrounds included a full-service RV park for 313 campers, a larger, relocated Midway area, a new Main Gate entrance, a new exhibit area for the New York State Police, and the Sky Ride, a 1,400-foot long chairlift ride. The Indian Village, a part of the Fair since 1928, also received renovations to its Turtle Mound, the home of cultural performances..

Present-day attendance is about double what the Fair was drawing during the 1950s and 1960s, as New York and the rest of the U.S. basked in a post-war economic boom tinged by a bit of Cold War angst.

So take a little trip in the time machine, and see the State Fair as it was then, contrasted with as it is today. All photographs courtesy of the New York State Fair. Click to the first picture to start the slideshow…

And will you be seen at the Fair this year?