Over the last 12,000 years, the landscape of the Finger Lakes region has undergone colossal change. Hidden in cracks and valleys throughout the region are wondrous geologic remnants of that change. So abundant is the splendor of these wonders that many locals have become numb to the consistent gurgling of waterfalls on their daily commute through, for example, the Village of Montour Falls, just south of Watkins Glen State Park, where residents often pass Aunt Sarah’s Falls on Route 14. Yet no two of the over 2,000 gorges that call the Finger Lakes home are the same; each has a different fingerprint with a different number of curves, caverns, and cascades.

The Finger Lakes themselves are a unique natural phenomenon. There are no other lakes quite like them in the world. Eleven north flowing lakes, varying in length and depth, span over 120 miles of the western section of New York. They range from Canadice Lake, at a mere 3 miles long, to Cayuga Lake, which stretches for 38.2 miles; and from the relatively shallow Honeoye Lake, at 30 feet deep to Seneca Lake, which plunges steeply for 634 feet.

About 2.5 million years ago dawned the age of ice. In this region, glaciers are thought to have been over 3,000 feet high, or about the size of two Empire State buildings stacked on top of each other! It is a result of these glaciers growing that we now have “finger lakes”; before we had “finger rivers.” All our U shaped lake basins were originally V shaped river valleys. As the glaciers bulldozed their way through the valleys, the unrelenting force gouged out the walls. About 12,000 years ago, a change in climate warmed the earth, ending the reign of the Ice Age. 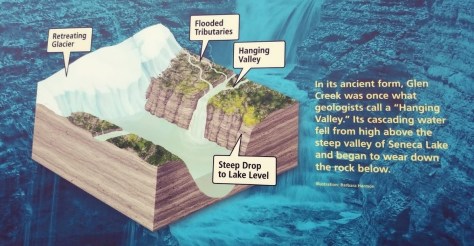 As the glaciers started to recede, their melting ice filled the lakes and exposed steep U shaped valley walls. All around would have been hanging valleys comprised of massive waterfalls dropping straight into the lakes. Today, every gorge near the lakes, including those south of the lakes, began its story as one of those waterfalls and has since eroded back into the rock.

“Ithaca is Gorges” is an iconic phrase in Ithaca, referring to the numerous gorgeous gorges around this city at the base of Cayuga Lake. This clever pun, however, has a forgotten key third part. As the massive waterfalls started to erode back into the rock, the eroded sediment built up at the base of the lake. This erosion was so rapid that our lakes are miles shorter than they were originally. “Ithaca is Gorges” because it was formed by the gorges and would not exist without them!

The extremely fast rate of erosion in our gorges alludes to its rich ancient natural history dating back long before the Ice Age. The 380-million-year-old layers of rock in the gorge were each once the bottom of an expansive inland ocean that covered much of the eastern states. The earth, as we know it, was unrecognizable; life was just beginning to take a foothold on land. In the little town of Gilboa, NY, proof of this timeframe can be found in the oldest fossilized trees worldwide. The early roots of these Gilboa trees were pioneering the rocky, unforgiving earth on the edge of the Devonian sea.

This tropical inland sea – which was at that time located below the equator – was the result of a collision between the North American and European continents. When they collided, North America subducted, or went under Europe, and Europe crinkled up creating the Acadian Mountain range just off the coast of New York. These impressive mountains were estimated to have been as big, if not bigger, than the Himalayas are today!

Much of the sediment found in the inland sea would have come from the erosion of these mountains, but the depth of this water would have, over time, also affected the type of sediment found on this ocean bottom. Gradually, the buildup of layers would have caused enough pressure to solidify the underlying sediment into rock. This is known as compaction. This means that every layer of rock in our gorges, be it the more brittle rocks, such as shale, or the denser rocks, such as sandstone and limestone, were once at the bottom of an ocean!

The layers however are only half of the puzzle influencing the speed of erosion in the gorge. Breaking up the layers, in a stunning display of natural masonry, are countless straight line fractures. There are fractures or joints that follow the gorges east to west and those that span across the gorge north to south, intersecting at almost perfect right angles. Notice the unnatural looking straight lines and right angles in the photo of Robert H. Treman State Park.

These joints date back about 300 million years. At this time, all the continents were joining together to form one enormous supercontinent.  Pangea, which translates directly to “all earth,” stretched from pole to pole. If you study a map of the world’s continents, you may notice that the western edge of Africa matches up with the eastern edge of the United States like a jig saw puzzle. The stress of this collision alone, however, was not the force required to create the fractures.

Instead, it caused straight line weak points in the rock perpendicular to the pressure. Meanwhile, a batch of methane gas had matured under pressure and heat and took advantage of the weak points to escape from the depths of earth. After this event, 30 million years quietly passed while Africa unassumingly rotated around North America. This quiet rotation was disturbed 270 million years ago when another batch of methane gas matured under heat and pressure, again utilizing the weakened rock to escape. The timing of this second release just so happened to occur when Africa was at about a 90 degree angle from where the first batch of methane gas escaped, forming joints that meet up at almost perfect right angles. Next time you find yourself in the Finger Lakes, keep an eye out for these natural right angles, they’re everywhere!

Considering all 380 million years of the gorges’ rich natural history; 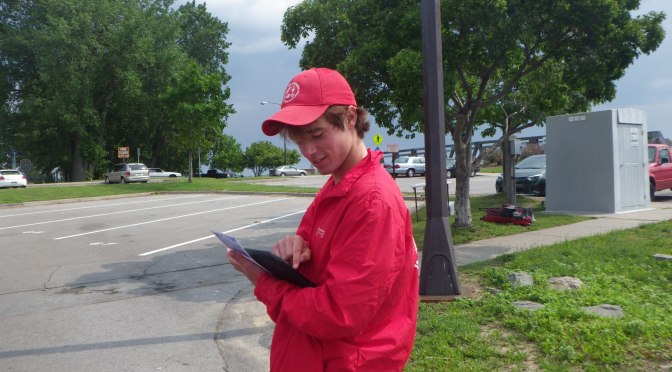 Over the summer, State Parks will have 15 Boat Stewards (Stewards) at many of our boat launches along Lake Erie, Niagara River, Lake Ontario, St. Lawrence River, Lake Champlain, Finger Lakes, and Saratoga Lake. The Stewards will conduct educational boat inspections to provide step-by-step instructions on ways you can effectively inspect your boat and dispose of invasive species. These demonstrations are both free and voluntary.

The New York State Park’s Boat Steward Program is one of many boat steward programs throughout New York State. These programs provide targeted educational programming to increase awareness about aquatic invasive species and other environmentally significant issues. When you come across a red-shirted Boat Steward please stop and ask us any questions you may have.

Stewards participate in periodic educational events, festivals, and invasive species removal projects, such as water chestnut pulls. Also, feel free to follow us on the Boat Steward Blog. Stewards will be writing about their experiences and findings as the summer goes on.

Download an Aquatic Plant ID sheet here. To learn more about other invasive species throughout the state, check out the New York Invasive Species Clearinghouse.