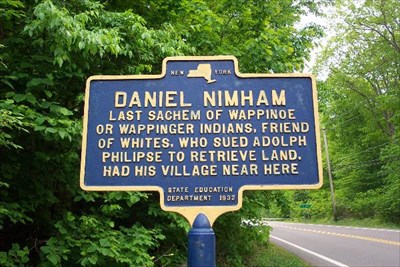 One of the most popular hikes in the Hudson Valley, the Breakneck Ridge Trail at Hudson Highlands State Park Preserve offers spectacular views of the historic river valley from its 1,200-foot summit. The trail is often listed among the best hikes in the region.

But this 4.4-mile trail, boulder-strewn, narrow, and steep, is also physically demanding for even the most experienced hikers. Not advised for the inexperienced or those used to flat trails, this challenging terrain has occasionally led to injured or lost hikers in areas where rescue can be difficult.

In July 2021, a new trail connecting to Breakneck was opened to provide an alternative, allowing hikers unwilling or unable to continue the arduous ascent to instead make a shorter, gentler, and safer return loop down to Route 9D.

Hudson Highlands Park Preserve Manager Evan Thompson said the Ninham trail will make hiking Breakneck safer for everyone, since hikers who want a short return no longer will go against the flow of hikers coming up. The new trail also provides hikers a slightly less vertical way to reach Breakneck Ridge. And just as importantly, the trail will also make it easier and quicker for rescue crews to respond to emergencies further up the trail.

Ninham Trail is a source of two compelling tales – first, the story of its rugged construction along the face of the ridge, including more than 540 stone steps handcrafted from the mountain’s own stone, and second, the history behind its namesake Daniel Ninham, who was the last chief of the Wappinger tribe that once lived in the rocky Hudson Highlands of Westchester, Dutchess, and Putnam counties. (His last name has also been spelled Nimham, based on the historical record, but the preferred spelling is Ninham.) Ninham and other Wappingers lost their lives fighting on the patriot side during the American Revolution, but despite that the tribe was ultimately pressured several decades later to relocate out of New York and eventually wound up halfway across the continent.

The native granite of the Hudson Highlands where Ninham once roamed forms the spine of the Ninham Trail, which traverses the face of a ridge to connect Breakneck Trail with the Wilkinson Memorial Trail originating on a Route 9D trailhead. Starting in summer 2020 and continuing to completion in June 2021, crews from the firm Tahawus Trails LLC, of Accord, Ulster County, and the volunteer group Jolly Rovers Trail Crew, of Poughkeepsie, worked to carve out the trail and lay in stone steps and bridges where needed.

With each stone step weighing an average of about 500 pounds, that’s more than a quarter-million pounds of stone, cut in place from boulders near the trail, and moved through muscle power aided by block and tackle, come-alongs and highlines, and set into place, with much of the work done by hand. The steps are a legacy as durable as the mountain itself.

The rugged trail honors the enduring legacy of Daniel Ninham, who was born in the Hudson Valley near Fishkill in the mid-1720s as Dutch and later English colonists were extending their control over Wappinger and other native lands. By the 1740s, Ninham’s Wappingers and a patchwork of members of other dispossessed tribes in that region had gathered in western Massachusetts, in what today is Stockbridge, Berkshire County. Forming a European-style town named after a place in England, the native inhabitants converted to Christianity and were known then as “Stockbridge Indians.”

The Stockbridge community, which also included English settlers, was mixture of Wappingers, Mahicans/Mohicans, and Munsee (also known as the Lenape or the Delaware), such as the Esopus and Catskills, as well as other Native peoples.

As Stockbridge chief (known as a “sachem”), Ninham was fluent in English and tried unsuccessfully to use Colonial courts to regain massive tracts of the lost Hudson Valley lands, claiming deeds had been fraudulently obtained. He later traveled to London in 1766 to make an unsuccessful appeal of the case to British royal officials, who asked the Colonial government to reexamine the case, which was upheld despite disputed and contrary evidence

During the Revolution, Ninham and his warriors, known as the Stockbridge Militia, angered by what they considered these earlier British betrayals after having supported Britain in the French and Indian War and other conflicts, sided with George Washington and the Continental Army, believing that fairer treatment might be obtained from a new government. Militia members served with patriot forces at battles including Bunker Hill, Ticonderoga, Valcour Bay, Saratoga, and Valley Forge.

In August 1778 during fighting around New York City, Daniel Ninham, his son, Abraham, and more than a dozen soldiers of the Stockbridge Militia were killed by British and Hessian forces during a battle in what is now Van Cortlandt Park in The Bronx. A stone monument to the Battle of Kingsbridge by the Daughters of the American marks the spot today as one of the reminders of Ninham in New York State.

In the town of Fishkill, at the intersection of routes 52 and 82, the state installed a monument to Ninham in 1937. A memorial to Ninham is in Putnam County Veterans Memorial Park in Kent. Also found in Putnam County is the 1,054-acre Nimham Mountain Multiple Use Area, operated by the state Department of Environmental Conservation.

However, the Stockbridge Militia’s sacrifice did little to stop encroachment on their Berkshire County land even during the war, and the tribe, weakened by its manpower losses and pressured by former colonists who had taken some of the land and wanted the rest, moved westward to Oneida County south of what is now Syracuse. As part of that move in 1783 as the war ended, the tribe received a personal letter from George Washington thanking them for their service during the Revolution, calling them “friends and brothers” who “fought and bled by our side.” Washington urged that the Stockbridge “not be molested in any manner” during their journey west. As a gesture to his allies, according to some accounts, Washington also paid for the tribe to have an ox roast at Stockbridge before they left, something that current tribal officials conducted an archeological investigation into in 2019

After moving onto lands provided by the Oneida tribe, the Stockbridge again faced pressure in coming years to move, as land speculators and squatters desired that property as well. Some members attempted to move to Indiana in 1818, but were blocked when the Delaware and Miami tribes, which had agreed to take in the Stockbridge, lost control of the land to approaching colonists. In 1822 after reaching a sales agreement with New York State, the remaining Stockbridge left the state entirely, and moved to Wisconsin, where members currently have recognition as the Stockbridge-Munsee Band of Mohican Indians.

Numbering about 1,600 members, the group has a 24,000-acre reservation in Shawano County, west of the city of Green Bay. According to the tribal website, there are only “seven or eight” people alive who can still speak the native Mohican language, a consequence of colonization. Tribal efforts are ongoing to keep the language alive by introducing it to this generation.

So, the story of Ninham is a hard tale befitting a hard path for his people, but also a story of a people who have endured despite such extreme hardship. On its website, the Stockbridge-Munsee Band describes itself as a “long suffering proud and determined people (who) … were pushed from the eastern seaboard across half a continent, forced to uproot and move many times to our present land.” As a modern logo, the band uses a stylized representation of “many trails” to symbolize the many trails the people took to reach this present day.

When walking the Ninham Trail, imagine the muscle and sweat it took to build, and also recall its namesake, a man who once walked those hills, lost his homeland as he tried to navigate a perilous path among powerful forces, and who ultimately lost his life and that of his son as his community gave its support to the cause of founding the United States, believing it could give his people just treatment.

Cover shot – The roadside marker to Ninham and the Wappinger in the town of Fishkill, Dutchess County, at the intersection of routes 52 and 82 . (Photo credit – Wikipedia Commons) All photos NYS Parks unless otherwise noted.

We strongly recommend following proper hiking safety guidelines and having knowledge of the conditions you will be facing before your planned hike. For best practice:

● Please stay on marked trails. Walking off trail damages the surrounding ecosystem and is the main cause of lost hikers and injuries.
● Wear proper footwear (such as hiking boots or sturdy shoes) and clothing to match the weather forecast.
● Bring enough water with you, carry a paper or digital trail map, and make sure to leave enough time to complete your hike. The park is open from sunrise to sunset.
● Please note that overnight camping and fires are prohibited throughout the park.

● Find maps of hiking trails in Hudson Highlands State Park Preserve here and here (this second map link shows the Ninham trail, which is designated by the letters NH). Learn about other staff-recommended hikes here.

The Road to Kingsbridge: Daniel Nimham and the Stockbridge Indian Company in the American Revolution, American Indian Magazine, Fall 2017

George Washington’s Proclamation on behalf of the military service of the Stockbridge Indians, July 8, 1783

Land Heist in the Highlands: Chief Daniel Nimham and the Wappinger Fight for Homeland, by Peter Cutul, NYS Office of Parks, Recreation, and Historic Preservation