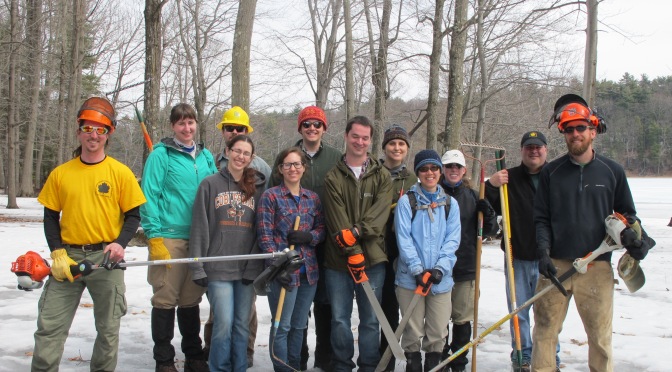 Evicting invasive species from our parks is a tough job. Clearing Phragmites from around the rim of Moreau Lake in Moreau Lake State Park, for example, takes a large team of environmental staff and Student Conservation Association Interns an entire day, as we found out in early April. 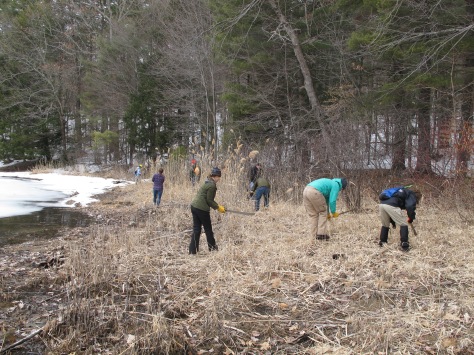 Phragmites is a tall reed which grows all over the world and has culturally been used for food, weapons, weaving material, music instruments.¹ However, populations of Eurasian Phragmites were introduced to the U.S by boat during the 18th and 19th centuries. Lacking natural population controls, the invasive Phragmites has rapidly spread throughout the U.S.²

Phragmites spreads rapidly because, in addition to reproducing through seeds, it also clones itself through rhizomes, a type of root that can form new, genetically identical plants. In this way, Phragmites can rapidly form dense stands that overcome all other plants in an area.³

Cutting down Phragmites isn’t easy work. Structurally similar to bamboo, Phragmites needs to be cut down with a heavy machete or a metal-bladed weedwhacker. Plant can grow as high as fifteen feet and often shelter higher populations of ticks than stands of native plants. 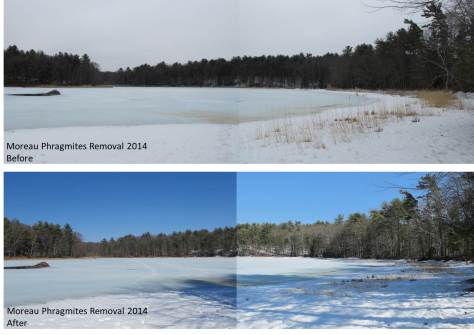 Because of the particularly pernicious nature of Phragmites, NYS Parks uses herbicide on large stands, in addition to manual and mechanical forms of control. However, even after the plant is dead, cutting Phragmites down is an important part of the restoration process because it allows native plants to recolonize the area, improving the health of wetland ecosystems and building a buffer against future Phragmites invasions.