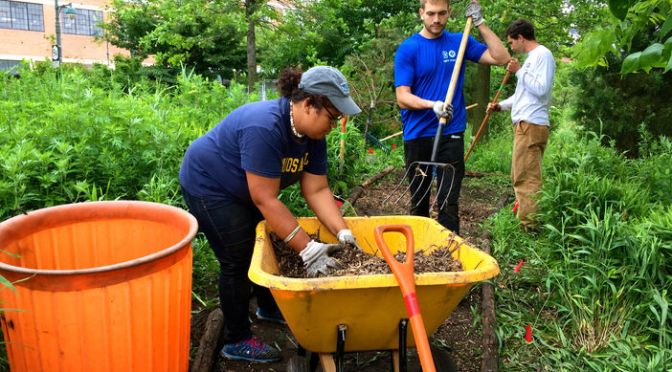 Since January, we have been members of the Excelsior Conservation Corps, an AmeriCortps program. We work in New York State Parks and state-owned campgrounds and improve the infrastructure (structures that we use to access and enjoy spaces – such as roads, trails, buildings, etc.) of these natural areas. One of our first experiences as members of this program took place in Saranac Lake, in the Adirondacks. Our project was to work with the New York State Department of Environmental Conservation (DEC) workers, and produce thunder boxes (box toilets), outhouses, and register boxes (for trailheads). We helped cut, paint, and attach all of the pieces, and then put them together in a way that would help people in the future easily assemble them in the field. Our crew enjoyed carpentry projects such as this. We did more than just improve our carpentry skills during those cold March days, we created friendships within our own crew and with the workers in Saranac Lake. To show their appreciation for our hard work, our project partner took us to the summit of White Face Mountain, the fifth tallest mountain in New York! We got to ride in an elevator made by the Civilian Conservation Corps – the group that our Corps is based on. We also explored the weather station that is situated at the summit and marvel at the gorgeous high peaks of the Adirondacks. This was a great time and was just an introduction to the adventures that would follow!

Marlena testing out one of the outhouses, photo by Michaela Aney

Marlena and Rebecca at the Summit of Whiteface Mountain, photo by Michaela Aney

In June, our crew ventured to Robert H. Treman State Park in Ithaca. Our job was to rebuild steps on the Gorge Trail. When we arrived, we found a steep trail covered by asphalt and parking barriers and we had the task to remove it all. We started by prying up the heavy concrete barriers and chipping away at the asphalt. Once removed, we then had to carry it all either up or down the hill, depending on what part of the trail we were on. We estimate that we moved more than 20 tons of material over the course of about 18 days! We then began cutting wood and digging dirt to install box steps – 147 steps to be exact! These steps were made from 3 pieces of wood, continuously stacked on top of each other and filled with gravel. The new steps are safer for hikers and will slow down trail erosion allowing park visitors to enjoy the trail for many years to come!

It was a lot of hard work, but we were rewarded with thousands of thank yous from park visitors, beautiful views (Ithaca really is gorges!), and the satisfaction that comes with another completed project.

These were two of the amazing projects we completed this year.