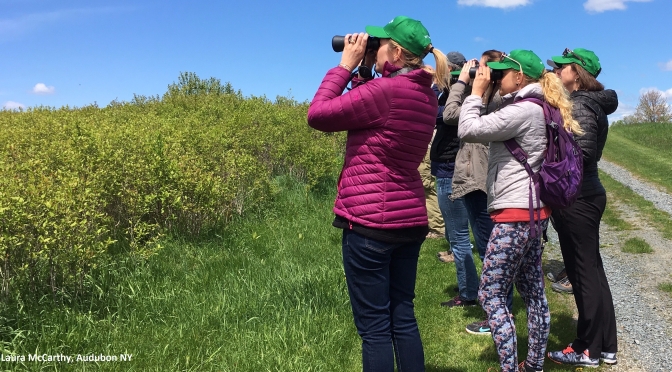 This year, the New York State Bird Conservation Area (BCA) Program celebrates its 20th anniversary. Since 1997, the BCA Program has been promoting the conservation of birds and their habitats on designated state-owned lands and waters in New York State. There is no other program like it in the United States. The BCA Program is modeled after Audubon’s Important Bird Area (IBA) Program but is backed by legislation.  Sites are considered for BCA designation if they meet criteria relating to high concentrations of birds, bird diversity, or the presence of at-risk species. Recognizing a site as a BCA brings awareness to the needs of birds on state-owned lands and encourages management that benefits the bird populations. While the BCA Program focuses on birds, the program also benefits other species that share the same habitats.

Audubon has partnered with the New York State Office of Parks, Recreation and Historic Preservation (State Parks) on the BCA Program since its beginning, and has held up the BCA Program as a model for other states to protect birds. This fall, Audubon was delighted to join State Parks in celebrating the 20th Anniversary of the program, in conjunction with the designation of the 60th BCA in Ganondagan State Park.

In recent years, Audubon’s partnership with State Parks has expanded to include Audubon in the Parks initiative, which is a partnership with Audubon New York, State Parks and its Regional Commissions, Audubon Chapters, and friends groups to advance bird conservation in State Parks, specifically focusing on BCAs and IBAs. Through Audubon in the Parks, Audubon assists with the implementation of BCA management recommendations, conducts bird monitoring, and helps with other strategies and research activities that benefit priority birds and habitats. In addition, Audubon advocates for funds to ensure that habitats are preserved and managed in a way that benefits priority birds and further connect people to these unique places.

Through Audubon in the Parks, Audubon has been active in more than 50 State Parks across the state, including 20 BCAs. This successful initiative continues to grow through projects like the one recently completed at Schodack Island State Park, which has been designated as a BCA because of nesting Cerulean Warblers and wintering Bald Eagles. Led by the Audubon Society of the Capital Region, this BCA project included building bird blinds for visitors to view birds without disturbing them and removing invasive species within the park. The chapter continues to foster a community connection to the park and importance of this BCA by hosting eagle walks and other events such as the recent Schodack Island Raptor Fest.

Audubon congratulates New York State on the BCA program and looks forward to continuing the strong partnership with State Parks to make New York a better place for birds and people.